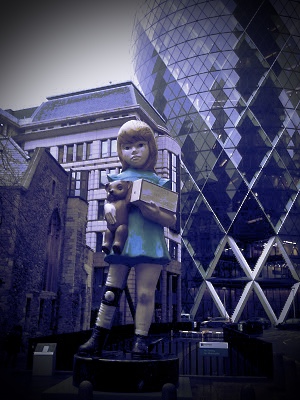 ‘I found something out about your past, today and, to be honest, I’m quite shocked,’ says my eldest.

His tone has me instantly and involuntarily auditing the past fifty-three years of my life for things that might be about to cause me some major embarrassment. This could take a while.

‘You’re going to have to narrow it down,’ I say.

‘Hang on,’ he says, ‘I have a photograph here, somewhere.’ He pulls out his phone and starts to scroll.

I can’t begin to guess what he’s about to show me but I’m already wondering how on earth I’m going to be able to talk my way out of it if he’s got photographic evidence.

I’m about to panic and shout ‘Fake news’ at him when he suddenly finds the image he’s looking for and points it at me. ‘Really?’ he says.

I’m somewhat relieved by the image he’s confronting me with, but I see his point. ‘Now, just because I might have been there doesn’t mean I had anything to do with it,’ I say.

He looks at me and I note the disappointment in his eyes.

I take his phone and study the image closely. It’s a montage of high street shops that the UK once took for granted but which no longer exist.

‘I think C&A still exists in parts of Europe,’ I say, pointing.

‘That’s not the one I’m referring to.’

In the bottom left corner of the montage is a small charity retailer with the words SPASTICS SHOP in large red letters above the front window.

‘The word didn’t have the same connotations back then.’

‘What did it mean in your day?’ he demands.

‘Back in my day, it was used by doctors.’

‘Well, I hope they were disciplined for it,’ he says.

When I was little, my grandmother was forever collecting things “for the spastics”. I was never given a satisfactory explanation of what a spastic was, but I sensed it wasn’t an ideal thing. Apparently, they needed her cardigans and my granddad’s old hat. She also collected milk bottle tops for the blind. Again, she never gave a clear explanation of what the blind were going to do with them.

‘My gran used to collect can rings for the blind,’ my son reminds me. ‘She told me they recycle them and get money. No idea why the rest of the can was useless to them, though.’

I nod in acknowledgement. ‘It does seem a little defeatist to be told to discard the majority of the resource,’ I say. ‘It’s also not an activity designed to empower the blind … apart from the ones with metal detectors, I suppose. Teach a man to fish … etcetera.’

He looks at me, leaving me ample time to replay my last sentence in my head. ‘Forget that last bit,’ I say.

It’s funny how the same words move on to mean different things over time. ‘Sometimes, words start off innocently enough then develop a negative image with use. And sometimes the opposite happens. Did you know that the word hysterical was originally both innocent and sexist.’

‘It can’t be both at the same time,’ he says. ‘Schrodinger’s vocabulary?’

‘Turns out that “hysterical” comes from the Greek word for “womb”. The Greeks honestly believed that hysteria was a condition only suffered by women. Caused by a disturbance in the uterus.’

‘Yep. Turns out that hysterical is no laughing matter.’

Later that evening, my son phones me.

‘It’s Scope,’ he says. ‘The Spastics Society was renamed Scope. We have a Scope shop around the corner from us.’

‘You do,’ I say. ‘That’s history hiding in plain sight for you.’

‘By the way, Mum says you bought your first dress to go nightclubbing in from C&A. 1983? Hang on, she sent a picture. I’ve got it here somewhere … I’m just pinging it over to you.’

1 thought on “It’s not my fault the past isn’t what it used to be.”