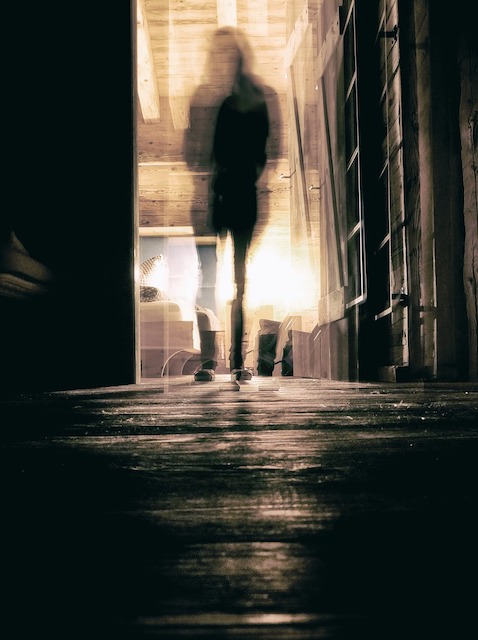 ‘There are periods, sometimes stretching for days, when we’re not aware of a presence in the house at all. And then the sounds begin; furniture scratching across floors, items falling from shelves, glasses or cutlery going inexplicably missing. This is sometimes accompanied by what sounds like faint laughter from behind closed doors. Occasionally, we’ll find lights burning brightly in empty rooms and hallways where we’d only moments earlier switched them off.’

‘This isn’t altogether unheard of,’ says my neighbour. He used to be a priest but now works for the council.

‘And then comes the silence,’ I continue. ‘We might not sense another occurrence for quite some time and then, suddenly, our milk will mysteriously move in the middle of the night.

What could easily be mistaken for a poltergeist is actually just our son, having recently moved back in with us.

My neighbour nods sagely. He has two of his own.

Magazine sociologists refer to it as ‘boomerang culture’. This is where kids move out, have a seizure over the realisation that independence can come with a hefty price tag, and then move back in again.

The gentle scent of fresh flowers and warm coffee that has permeated our house over the past year since he moved away has quickly been dwarfed by Lynx Africa.

‘Have you thought of taking some time out to do charity work in Kenya, being you like the smell so much,’ I ask.

I understand that it’s not easy being twenty-two with no sense of direction. I’m fifty-three and suffer with much the same problem. Magazine psychologists (yes, I’m an avid reader) talk about ‘imposter syndrome’. This is where one feels that one is about to be found out as a fake in ones chosen career. I suffer from the opposite: I do ok in my day job but worry that one day I might be found out to be only faking interest in it.

I realise that the ghost-like existence of my son around the house is not an intentional thing. In his mind, he’s an adult, leading his independent life. What we’re experiencing, however, is the ghost of the child he no longer is. Quite plainly, for him, this house is purely a hotel – albeit a very reasonably priced one.

‘Do you think he sees us as merely ghost staff?’ I ask Nat while we’re watching TV that evening.

‘I mean, when I have to go up to his room when he’s out to retrieve our dishes and forks and glasses and then, hours later, those same items reappear clean and neatly put away in the kitchen cupboards, do you think he ever wonders how they got there?’

‘I think he’s more sceptical about the existence of the dish washer than of us,’ she says. ‘In fact, I think he believes in us as a very tangible staff.’

So, there you have it. Same house: parallel dimensions. Two worlds that have recently collided within the same four walls, comprising of three humans and a cat – oh, and our son’s selection of invisible friends who live in the telly and whom he shouts at every night around 3am, through his headset.

Next morning, I bump into my neighbour again while putting the bins out.

‘Have you ever performed an exorcism,’ I ask. ‘As a priest, I mean.’

‘How might one go about exorcising one’s own children from a building … without causing them offence, of course?’

‘Hm. One of the more challenging types of exorcism,’ he says. ‘To be honest, after months of repeating the same incantations, my faith eventually faltered and I turned to more secular means.’

‘I put their rent up to match market rates.’

It’s 2am and I’m woken by what may or may not have been the sound of a door slamming across the house. Twenty minutes later and I’m still awake. I may as well get up now and make myself a cup of tea.

I venture downstairs without putting the lights on and fill up the kettle. I’m suddenly aware of a presence in the room with me. I turn quickly to see a shadow slide its way along the far wall.

The shadow doesn’t reply. It’s wearing the same beats headphones it was given for Christmas. As promised in the advert, no sound is spilling out of the headphones and I’m therefore assuming that none of my sounds are spilling into them. The shadow passes and is gone.

The kettle switches off and I reach into the fridge for the milk.

The milk is also gone.

‘Even our fridge is haunted,’ I say to a probably empty room.

10 thoughts on “Help! We’re being kept awake by our son’s invisible friends who live in the telly.”