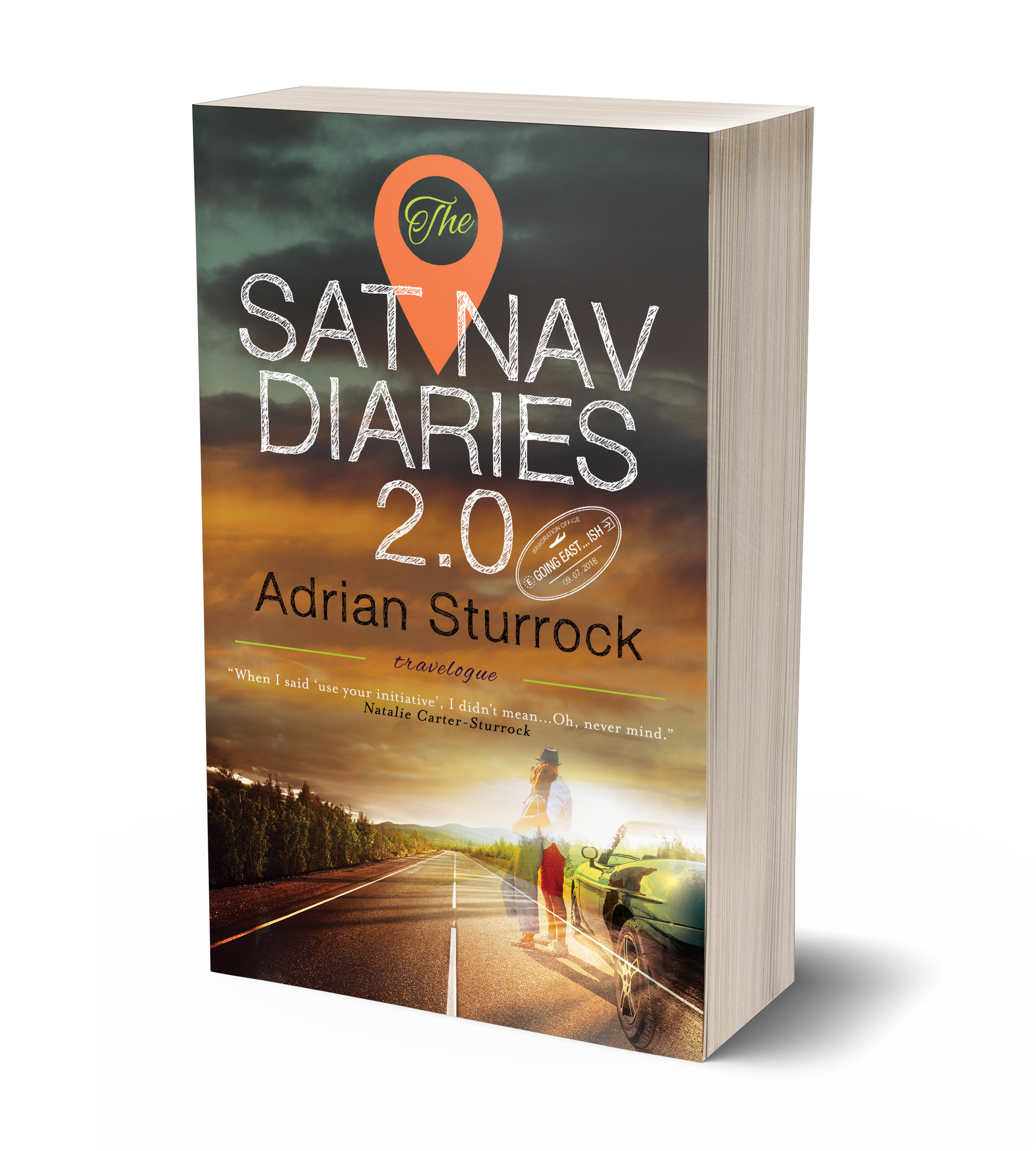 But if I do the wrong something nice, she might not like it. Best to do something she will like. Best to be on the safe side and text her to ask what she would like.

I was just texting to ask what you would like, I text.

I was just texting to ask what you would like as a surprise.

‘Please don’t keep texting me when I’m in a meeting, I really can’t talk right now.’

‘I was just texting to ask what you would like as a surprise,’ I say.

‘Yes, I know, you said that. What are you talking about?’

‘I wanted to surprise you with something nice. What might that be?’

‘You want to surprise me … by having me choose the surprise?’

‘Look. I don’t know.’ She sounds a bit annoyed. ‘Maybe we go out for a meal some time; or a weekend away … or something. Use your initiative.’

She hangs up. She’s probably busy.

I put my phone down and look at my computer screen. ‘A meal,’ I say to myself, ‘Or a weekend away … OR BOTH!’ I think about this. ‘Initiative. Yes, I suppose I could use that.’

And that’s when it dawned on me. Since Nat cured herself of vegetarianism, she’s really grown a liking for steak. ‘This is convenient,’ I say to myself, ‘I’ll take her out for a steak. That would be a surprise. She’d like that.’

I think about places that do a good steak, and then I remember a small restaurant by a river that I once had a really good one at. After some memory jogging and a bit of Googling, I find the restaurant online and book us a table. ‘This will be a nice surprise,’ I say to myself.

That evening, I decide to unveil my plan.

‘It’s OK,’ I say, ‘it’s all booked for Saturday evening. It’s a restaurant by a river. And I’ve booked us somewhere to stay so that we don’t have to drive.’

Nat notices the scrap of paper that I’ve scribbled details on, which I’d forgotten is still sitting on the table beside us. She turns it around to face her, then takes out her phone to Google the restaurant name. ‘Where exactly is this?’ she asks as she taps into the phone. She looks up at me as the answer pops up on her screen. ‘… Five hundred and eighty-six miles away? For a steak? A little bit extravagant, don’t you think?’

I smile at her. ‘I thought I’d use my initiative,’ I say.

‘Well, you’ve certainly done that.’ She smiles back at me. ‘I’ve never had to travel for nine hours, plus ferry, for a meal before. Please tell me you haven’t ordered a cab?’

The Le Sant Laurent restaurant sits on the bank of the Saône river, in Mâcon, in France’s Burgundy district, approximately forty miles north of Lyon and two hours west of Geneva. It’s nice there.

So, this is how this road trip came into being. I might have called the book Sat Nav Diaries 2: In Search of Steak, but that would have been silly and, as it turned out, a little misleading. And, further, I might have put off vegetarian readers. (Far better that vegetarians abandon my book halfway through because they don’t like it than refuse to engage with it in the first place, on ethical grounds.) Steak might have been the catalyst for this trip, but it certainly wasn’t the overriding objective, at least not in the end.

‘Maybe Nat was right about the excessive number of miles, just to go out for a steak,’ I say to myself. Had I over-initiative-ised? ‘Best throw in a show, then, to help justify the travel.’ By the end of Wednesday, I’d added a light show in Strasbourg and a Mozart recital two countries further on, in Salzburg. That should do it.

But what had initially felt like an outstandingly inspired idea at the point of hitting the SEND button on my laptop had descended into a potential WTF conversation by the time Nat had got home and I was sat in front of her considering how to break the news.

This coming weekend happened to be the start of a few weeks that Nat had booked off work with the intention of us organising some kind of getaway. But with a string of busy weekends leading back to the beginning of May, we hadn’t really found the time to properly sit down and address this. Eventually, we’d floundered onto an agreed ‘we’ll do something’, and had left it at that.

I decided to gently nestle my news within what I considered to be a soft cocoon of reward for her hard work and general loveliness. I took a deep breath, put my second from worst foot forward, and mumbled something to this effect, while looking into my wine glass for support.

Nat listened intently, allowing me to ramble away until I’d exhausted all avenues of positive spin. When I’d eventually finished, I gazed up at her, looking to anticipate and read my fate from the expression on her face. Any expression at all would have been nice, but she was playing her cards close. Was that the vaguest hint of a smile that I was seeing, or was it merely incredulousness that I was looking at? This made me think of all the times people had cooed over my eldest son when he was a baby:

‘No, it’s definitely a smile.’

It was like this with Nat, right then. What might be a hint of a smile might equally be the internal rumblings of a rising rage or, worse, disappointment. Best not to pre-empt fate by smiling back. Not yet. ‘So … um … What do you think?’ I eventually whispered.

‘What’s French for idiot?’ she asked me.

‘Though I could equally use imbecile or cretin or sot. They all mean much the same thing.’

And then she smiled.

Now seemed a good time to smile back.

We agreed that I would spend the next two days adding to my current arrangements to put together a more comprehensive road trip. Being handed this freedom was like … well, it was like being handed freedom. I looked at our route so far: Mâcon, Strasbourg, Salzburg. Salzburg would be the farthest east we would have travelled to date, at least by car. I looked at its position on my map. ‘It’s almost like an ever-so-tentative doorway into an exploration of Central — and maybe even Eastern — Europe,’ I thought.

Suddenly, I had an idea. I scribbled the words Sat Nav Diaries 2.0: Going East onto a piece of paper that was laying discarded on the coffee table beside me. I looked at the shape of the words on the paper. ‘East it is then. This time, we’re going east … ish.’ I spent the next day plotting a route.

Friday morning, over breakfast, I asked Nat to put together a list of things she’d like me to pack for her, and to add any items she might like me to pop to the shops to get, to save her from having to do it herself.

By midday, I’ve completed all my chores and am thinking that I might give her a quick call at work.

‘… and I’ve also bought you a nice little something to wear in bed during our trip,’ I say. ‘It’s totally see-through and made from absolutely nothing. In honesty, I didn’t so much buy it as make the whole thing up. I’m told by the rugby club that you look good naked ….’

‘Adie!’ she interrupts. There is a sense of urgency in her voice so I stop talking. ‘I’m in a meeting at the moment … and I’m surrounded by the senior management teams of two partner agencies … and you are currently on speaker phone …’

‘Goodbye,’ says Nat. I hear some background laughter as my phone goes dead. I think she might definitely be cross when she gets home, this time.

Luckily, by the evening, she’s in holiday mode and laughing as she recounts the reactions of her colleagues. ‘So,’ she says, ‘shall I try on my imaginary nightwear while you serenade me on air guitar?’

If you enjoyed this blog, please consider sharing it on your social media feeds. If you would like to purchase THE SAT NAV DIARIES 2.0, it is now available on https://www.amazon.co.uk/dp/B08R12RKRL