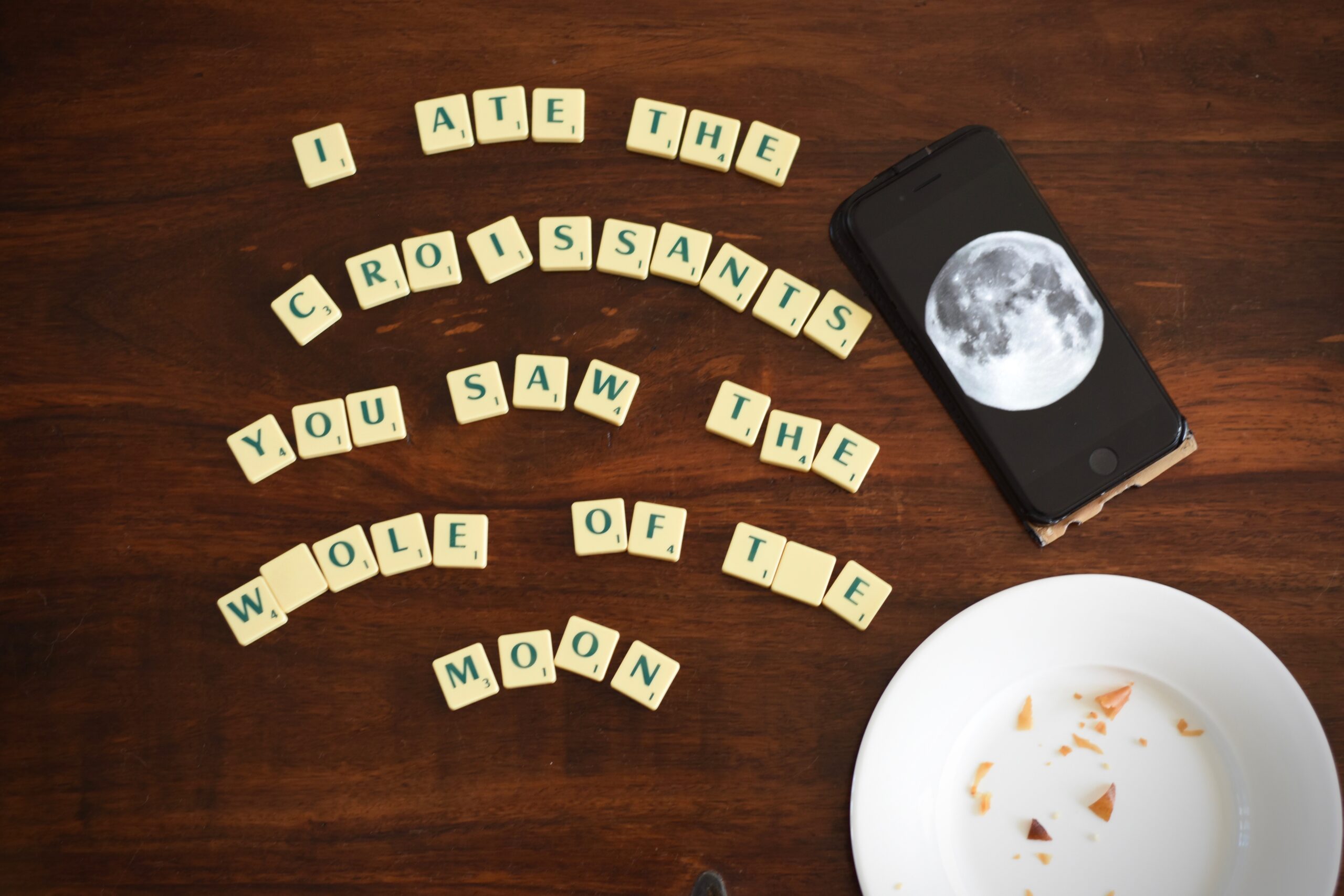 ‘Because I couldn’t sleep,’ she repeats.

She has a point. I take the opportunity to huff quietly to myself. Even at this early hour, passive-aggressiveness does not pass me by. ‘What time is it?’

I regret my question as soon as it’s asked – as soon, in fact, as Nat rolls over to look at the clock, taking the entire duvet with her.

‘It’s 3.22,’ she informs me, rolling back into her previous position and trapping any duvet I am now trying to retrieve firmly beneath her. I tug hard at a corner in order to recover at least a section for myself. Nat responds with a huff of her own, sending it spiralling upwards into the air somewhere above us, to meet mine.

I hold my corner of duvet firmly in my fist before rolling over onto it in order to ensure I don’t lose it a second time.

Within minutes, I’m nodding off to sleep but am soon abruptly woken again once more. ‘It’s no good!’ she says loudly. I feel the whole bed shake as she bounces out of it, again stripping the duvet fully from me. I feel that my earlier huff was huffed in vain. She walks around the bed and reaches for her dressing gown.

‘Where you going?’ I mumble.

‘Take your time,’ I say, before adding ‘… please,’ in order to make my point.

I’m woken moments later. Nat is standing over me, rocking me gently – though, I note, not gently enough to allow me to continue sleeping. ‘Adie? Adie?’

‘Is there any point in me huffing?’ I croak, pulling the pillow over my head.

‘What? Why?’ I’m now a little concerned. To be rocked awake and required to get up quickly at 3.23 in the morning must suggest some kind of emergency. ‘What’s wrong?’

I jump out of bed and straight into an old dressing gown, before racing past her and grabbing a long piece of vacuum cleaner attachment on my way down into the hallway. I begin to hunt, room by room.

‘What you doing?’ she asks.

‘Go back upstairs. I’ll let you know when it’s safe.’

‘… Why exactly am I standing here?’

‘I wanted to show you the moon.’

‘The moon. Look.’ She points out of the window.

‘The moon? You want to show me the moon?’ I look at her then down at the Hoover attachment in my hand. ‘Then, why am I holding this?’

‘I really have no idea,’ she says.

I place the attachment down and step away from it. ‘Why are you showing me the moon? It’s just … the moon.’

‘Because it’s pretty,’ she tells me.

‘Yes, but this one’s different.’

‘Come, see.’ She drags me toward the patio doors that lead out into the garden.

As I realise I’m about to be made to go outside, I quickly step into a pair of boots that have been left nearby.

Outside, it’s surprisingly bright, in a post-apocalyptic, Twilight Zone kind of way.

The whole garden is lit up in an overwhelming silver. The frost that is covering the tops of the bushes is glistening like diamonds. I see her point but I’m not sure I’m prepared to admit it.

I look up at the moon. ‘It’s like somebody has replaced the batteries,’ I say. I squint not to hurt my eyes. I don’t ever remember not being able to look at the moon before. ‘It’s very bright.’ I look at Nat. It’s like looking at her in daylight, albeit the daylight of a 1930’s Bela Lugosi vampire movie.

She looks back at me and laughs hysterically as I look back at her, bewildered, left to contemplate which Bela Lugosi movie I’m currently in.

‘Why are you laughing like … that?’ I ask, checking to see if any of the neighbour’s lights have come on.

I look down at myself. When preparing to step outside, I had anticipated that aesthetics would be less important in darkness. However, it’s not remotely dark out here, and my current knee length dressing gown and Chelsea boot ensemble isn’t, I feel, making the most of me. ‘I … um … I see what you mean,’ I say.

‘It’s like someone has dressed their duck up in boots,’ she says, still laughing.

I contemplate how my skinny ankles disappear into the darkness of the tops of my boots, and decide that my legs are more like those of a chicken. ‘Screw you,’ I say, as much to my legs as to Nat. (I’m not used to laughing at my own legs but then I probably don’t look at them often enough.)

Having attempted a few photos of the moon, we go back indoors. It’s not quite 4 a.m. but we’re wide awake now.

‘Tea?’ asks Nat. I nod, she puts the kettle on, and we sit facing each other at the kitchen table. It’s made of glass, and I catch her still looking/laughing at my duck/chicken (delete as appropriate) legs disappearing into the gaping tops of the Chelsea boots. ‘Whatever!’ I say, smirking back at her. ‘It’s getting old now.’

‘It will never get old,’ she informs me. ‘It’s like when someone puts cosies over the tops of their golf clubs.’

We’re no longer ready for bed, so we drink our tea at the table rather than take them upstairs.

We settle instead for a quick comparison of spam emails on our phones.

‘Um …‘ She scrolls. ‘It’s an eclectic mix, really … ‘White wife caught riding three African priests’, next to an offer to ‘Treat your lawn’. I’m not sure if these are in some way connected. … How about you?’

‘… I have one entitled, ‘Any man can last 2.5 hours in bed doing this’, next to one offering to sell me a ‘Knee Compression Sleeve.’ … I think my two might very well be connected.

‘I have another one reminding me to claim my prize of an Apple Macbook from a competition that I didn’t take part in.’ she says.

I scroll some more. ‘Sex help – 5G Male,’ I read out. ‘… I’ve never had sex in 5G. To be honest, I’d rather save the money and continue in old-fashioned 3D, perhaps with a bit of Nina Simone on in the background.’

I’m starting to feel a bit tired again now. ‘That thing about lasting 2.5 hours in bed,’ I say. ‘Do you think it’s an advert for ear plugs?’

We top up our tea in order to take them up to bed. While the kettle’s boiling, I ask Nat for a number between one and twenty.

‘Seventeen,’ she says instantly, without asking for reasons. (I like this about her.)

I go back into my spam mail and scroll down to the seventeenth email headline. ‘Ok, ‘Erectile disfunction,’ I say. ‘With an ‘i’ instead of a ‘y’. I grab a piece of scrap paper from the side and rip it in two, placing a piece in front of each of us. I quickly instruct Nat to come up with as many words as possible from the letters of the headline. ‘Remember to use an ‘i’ instead of a ‘y’,’ I say. ‘These people are, after all, the experts.’

By the time the kettle has boiled, Nat is ready to offer up her first anagram. ‘Lefties cured in tonic’,’ she offers.

‘Trice deceit fun loins’,’ I read out. I’m not convinced by this one.

‘I enforce diet in cults,’ Nat counters, clearly out-doing me.

‘Well, obviously, you get the official Erectile Disfunction – with an ‘i’ instead of a ‘y’ – cup.

‘Excellent!’ she says. She moves the flowers off the table and places them onto the shelf.

‘What are you doing?’

Back in bed, I’m wondering about the moon. ‘Nat?’

‘If the moon can puppet entire ocean tides, and if humans are supposedly sixty percent water, what affect do you think the moon has on people?’

My question is met with silence.

‘… ‘It’s no good!’ she says. I feel the whole bed shake as she bounces to get up, once again stripping the duvet fully from me. ‘The moon is having a pretty strong effect on my tea.’

I consider a last-ditch attempt at tutting as I reach to pull some duvet back over me but, secretly, I know that tutting doesn’t work.

1 thought on “I ate the croissants, you saw the whole of the moon”