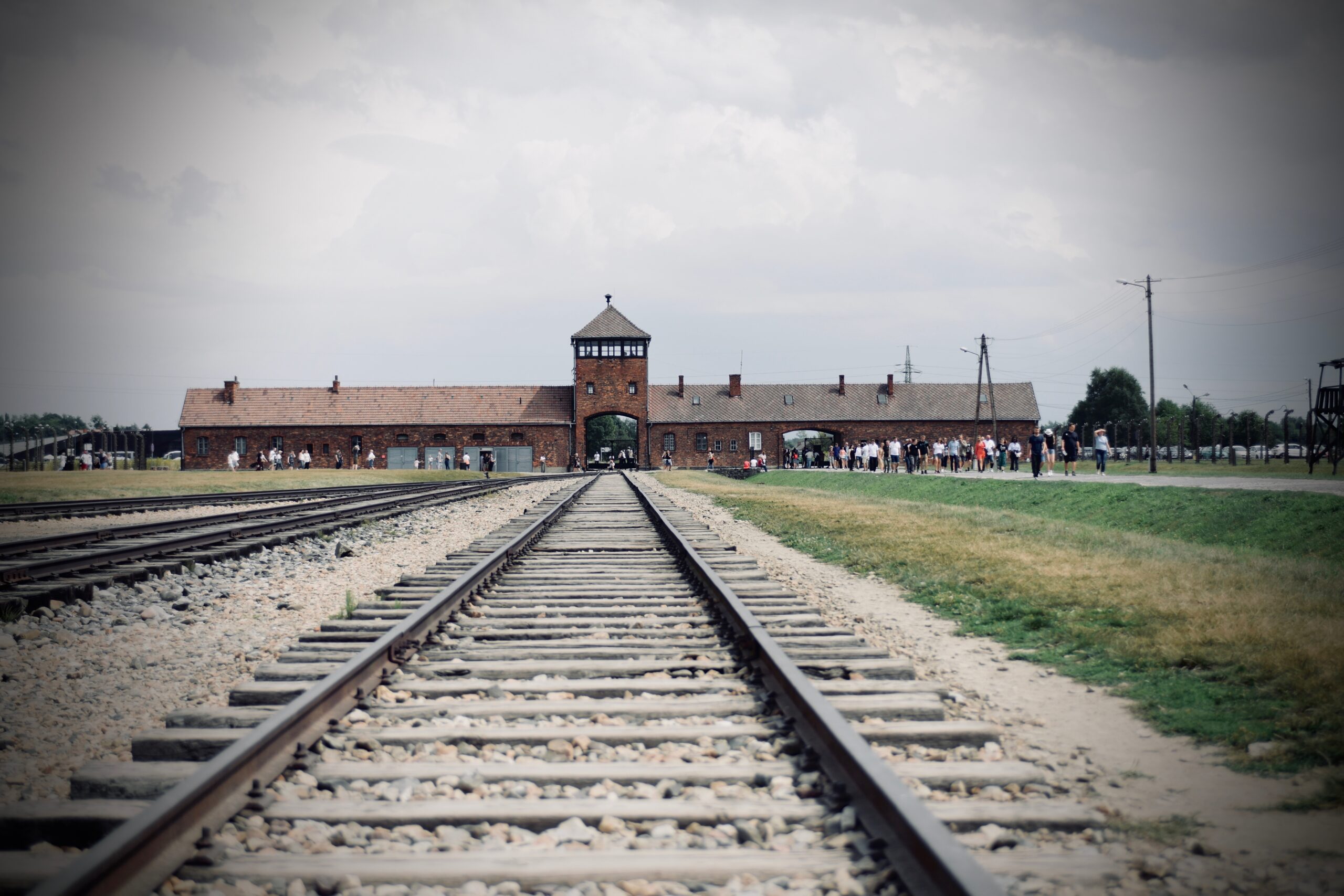 There’s a KFC drive-thru just outside the entrance to Auschwitz.

This is the first thing that strikes me as we make our approach — a single image of two points in time, sitting uneasily beside one another. I look along the residential streets, at the houses and lives set up metres from where so many murders took place, and wonder how the local residents compartmentalise this in their minds.

Historically, the town was known as Auschwitz only to Germans and Austrians; it was always Oświęcim to Poles, Oshpitzin to Jews. Nevertheless, the saying goes that, there were Jews in Auschwitz long before there were Jews in Auschwitz. Before Nazi occupation, Jews from Central Europe would take trains here for the privilege of dying in its spiritual earth. Needless to say, there are no Jewish residents in the town today.

As an act of curiosity, while our coach searches for its parking space, I type my observation into Google: There’s a KFC drive-thru just outside the entrance to Auschwitz. With predictable lack of reverence, Google quickly does its thing and websites of possible interest pop up onto my screen. The top response is KFC Finder – Find Your Nearest KFC Restaurant. This doesn’t altogether surprise me; I guess more people are interested in spicy chicken than they are in the Holocaust.

The second offering, however, leaves me a little colder. I tilt my phone so that Nat can read what’s on my screen: Auschwitz, USA: A Comparative Study in Efficiency and Human Resources Management. She looks at me. ‘My god, we’re all fucked,’ she says.

I scan down the rest of the listings. Number four introduces itself with the question, What happens to your body when you’re cremated. If Google is currently in its AI infancy, I’ve got a feeling that it may very well grow up to be one sick individual. I put my phone away and grab my bag.

Nat and I had discussed whether or not we should visit the Auschwitz-Birkenau Memorial and Museum while in Poland. I think we both worried that we might somehow get caught up in what may be merely voyeuristic tourism. But this is no theme park, and this is not the case. Now that we’re here, we’re both struck by the respect that both officials and visitors around us have for this place. We all know the Auschwitz story; I’m just wondering how the inside of the camp might feel to me on an emotional level.

‘Yes,’ she says and holds my hand.

After a few moments, our guide returns from the admissions office and requests that we all attach a yellow circle to our clothing. ‘So that you can be easily identified by the officials inside,’ he tells us.

I look around and notice that the group adjacent to us has been identified with blue circles.

‘And please don’t take your bags into the camp with you,’ he continues. ‘Leave them on the bus where they will be looked after for you.’

Nat looks me in the eye. ‘Please don’t say anything,’ she whispers, putting a finger gently over my lips. ‘I know what you’re thinking.’

‘I wasn’t going to,’ I whisper back, ‘though, you’re right, I’m definitely thinking it.’ I peel the adhesive backing off my yellow circle and attach it, as requested. ‘At least it’s only a circle,’ I whisper. I smile at her.

We hold hands and walk onwards.

It’s a strange form of deja vu, being led into a scene that one has witnessed so often on television and in movies. I wonder if there’s another French term for when one recalls something that one knows one has never experienced before? We walk in unison with our group towards the official Auschwitz I entrance, looking up at the famous lie cast in iron on the threshold arch above our heads. Arbeit macht frei, it says. Work sets you free.

Auschwitz I was set up as a prison camp, while Auschwitz II (Birkenau), two kilometres further along the road, was conceived specifically as a death camp, and Auschwitz III (Monowitz), a forced labour camp. That’s not to say that murder wasn’t a regular theme in all three. Here, we are taken past the execution wall, the hanging posts, the buildings in which prisoners were subjected to enforced sterilisation experiments, and, finally, to rooms in which captives were gassed with Zyklon B.

We are led alongside huge glass cases filled with suitcases, eye glasses, mountains of human hair, all intended to both shock and remind. I’m struck by a small pair of child’s leather shoes that are sitting amongst a mountain of others. These are roughly the same size as my own children’s first shoes, which I still keep in a box, safely, at home. I feel an overwhelming urge to hug my children a little tighter when I next see them.

Lunch is provided as part of our booking, and we are handed it in small paper bags as we emerge from the camp.

I take a look inside mine. ‘Nat,’ I whisper, ‘Check out the irony in your bag; mine’s been cut into triangles and vacuum wrapped.’

‘Do you think they’ve properly thought this through?’

I pull out said item. ‘Ham sandwiches? Really? On the site of a Jewish Holocaust?’ I pretend to read the side of the container: ‘Two hundred and twenty calories, with added guilt and a dash of unintended antisemitism … May contain nuts.’

‘Shh! Just eat it,’ she says, looking around us.

The approach to the Birkenau camp is a pathway that runs parallel to the railway tracks that once drew several thousand victims per day into its wide, arched-open mouth. No grass or summer flowers grow amongst the railway sleepers. The only spot colour amidst the oil-smeared stones and weathered steel comes from occasional modest bouquets placed in memory of the murdered.

Transported like livestock, in packed cattle wagons, 1.1 million people died or were executed during the three short years that this place was operational.

We walk in silence, every now and then stopping to take in the visual impact of what, covertly or otherwise, stood as the shop front to the Nazi’s Final Solution, the mouth of the entrance getting ever bigger as we walk ever closer. I look up at the watch-tower above us, imagining guards looking back down on us.

It’s easy and convenient to believe that what went on here were the acts of some extremist cult. Words like evil are used to disassociate normal people from the worst acts of other men; it is less comfortable to believe that the atrocities that went on behind these walls were the acts of intelligent, educated individuals, respected by society and able to bypass their own morality so easily by subscribing to the day job: ‘I was merely following orders’.

‘This could easily happen again,’ I say, ‘at any moment, in any country.’ I point up at the building: ‘This is a monument to the capacity of the collective.’

Nat doesn’t answer; she squeezes my hand a little tighter as we move towards the entrance, constructed from a similar austere red brick to this morning’s sister camp: harsh, utilitarian, dehumanised. This facade is the image of so many movies and, again, I sense that disturbing familiarity about it all.

Once through and into the camp, the railway track extends off into the distance. One solitary railway carriage conspicuously loiters a few hundred feet from us, a reminder of the authenticity of stories too awful to be true.

The complex itself is large and only partially still standing, such was the Nazi’s paranoid need to quickly hide the evidence of their acts as the Third Reich fell into defeat. But there is enough remaining for us to see for ourselves exactly what this camp was about. There is evidence of the stark living conditions, of the large gas chambers that masqueraded as shower rooms, of cremation ovens and mass graves — of all the necessary ingredients one might need for the industrialisation of murder. I look down at my shoes and wonder how much of the dust on them might be human.

My university professor maintained that history teaches us nothing, and I’m reminded of this as I watch a small group of twenty-somethings taking turns to arrange their hair and pouts in order to capture the best selfie against the same cattle waggon that ushered so many Jews and Poles and Roma to their deaths.

‘All we need now is for the gift shop to sell Auschwitz fridge magnets,’ I say, nodding in the direction of one of the girls who is busy arching her back against the side of the wagon in mid trout-pout. A little later, I’m a bit disappointed to find that it does.

Before heading back to Krakow, we are given the opportunity to meet with a survivor of the Birkenau camp, a Belarusian Jewish lady called Lidia Maksymowicz, who had entered the camp at the age of three and was only spared (unlike her sister who was shot on arrival, and her grandparents who were directed straight into the gas chambers) because she was deemed fit enough for experimentation by S.S. surgeon Dr Josef Mengele. She still bears the scars and needle marks of the medical procedures carried out on her.

After the Red Army had liberated the prisoners from the camp, Lidia was placed with a Polish family and was brought up as one of their own, though both she and her new family had first to work through some of the trauma that she had suffered.

Perhaps of all the anecdotes that she shares with us, the most heart-wrenching for me is how she narrates her initial inability to play with the children of her new family. Play is a learned activity; it manifests itself in the young as a role-play procedure through which they gain understanding of the world around them by first copying it. Lidia didn’t know what to do with toys; she’d never had any. Instead, she would gather all the children in the street and divide them into two lines: ‘You go into that line, to work; you, join that line, to die.’

Later that evening, we are sitting back in Krakow’s main square. I’m not feeling at all depressed by the experiences of today, but I do feel a little changed, perhaps a little angrier.

‘Remember I said to you that if our country was ever at war, I’d simply sell up and go live on a beach somewhere warm til the bullshit was over?’

‘Why is that annoying?’

‘It’s annoying because while I don’t have a patriotic bone in my body, I don’t think I could sit back and be complicit in allowing a group of people to be victimised.’

‘Welcome to the Resistance,’ she says. ‘We’ve been waiting for you.’