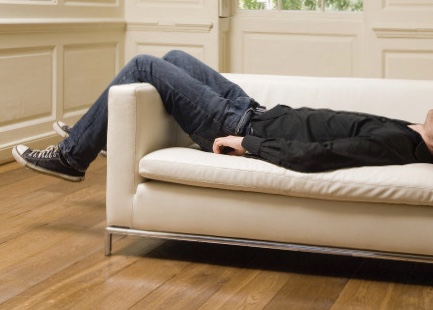 ‘You’d make a lousy junkie,’ my wife informs me as I’m busy whiting-out on the sofa.

‘Must … try … harder,’ I mumble, in my semi-conscious state. And then I pass out.

When I come round, I’m in the recovery position. She has set a bowl down beside me. ‘Just in case,’ she tells me. She has also placed a cold drink at what she wrongly considers to be within my reach; at a distance that, to be fair, I would easily manage on a normal day. Today, however, is not a normal day. Today, I am injured. Twice.

Injury One is the result of a climbing accident that occurred last night. This, I’d like to think, makes me sound far more interesting than I actually am – or feel. I’d like people to imagine me hanging precariously from a frayed climbing rope, having fallen into a deep crevasse on some infamous Nepalese mountain. Perhaps I’d been left for dead by my team mates who couldn’t possibly believe that anyone would have survived the unprecedented avalanche that landed me here. I’d like people to imagine that I’d managed to survive the night, and somehow climbed out of this deep gully before orientating myself back to safety, thus surprising both locals and fellow climbers and rendering me somewhat of a local climbing legend.

In reality, however, I’ve torn my shoulder through sheer stupidity, on an indoor climbing wall attached to a leisure centre about twelve miles from Watford. My arm still hurts though.

I am at mid-strain towards my drink when I notice my wife sitting on the sofa adjacent to mine. She has stopped reading her book in order to muse over my inadequate movements. She is wearing that expression that she sometimes puts on, the one that doesn’t let on whether it’s a smirk or a pondering. I offer a half-smile back, ‘just in case.’

‘Mmph!’ I whimper, as my arm involuntarily flinches, reminding me that I really shouldn’t be attempting to use it in any way whatsoever. I recoil slowly and refold it back under myself.

This evening’s pain is somehow different to this morning’s. This, I’m guessing, is due to the heavy-duty anti-inflammatories and opium-infused cocktail suggested by my GP, which has rendered me a less than cheap imitation of who I used to be. Just a few hours ago, the only thing wrong with me was the torn muscle which, though totally incapacitating in a sheer, toothache-like agony sort of way, was at least a localised affair.

Since visiting my local NHS pusher, my entire body has been reduced to rubble, and thinking actual thoughts has greatly diminished. I very much doubt that Sherlock Holmes really solved crimes while on opiates. I can hardly operate the TV remote control.

‘My arm isn’t hurting as much, now,’ I tell my wife, a little later.

‘That’s western medicine for you,’ she says. ‘As long as the chemicals solve the immediate issue, they’re considered a success. Any collateral damage they leave behind – in this case, [she’s pointing at me] the jibbering mess that used to be my husband – is considered merely ‘side effects’.

She pauses to consider the question. ‘… At the moment, pretty much,’ she says, nodding and smiling.

I think I agree with her; I’m just not really able to articulate this right now.