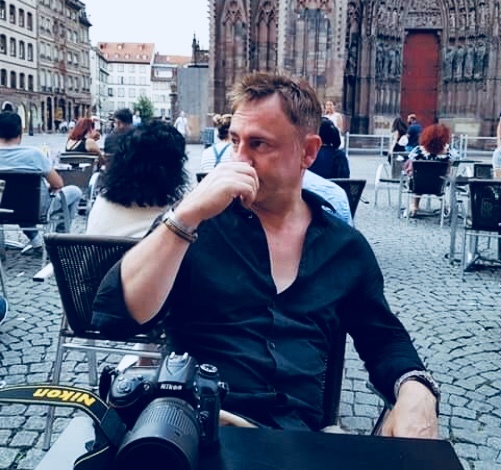 If there was ever further proof needed as to why the European Union remains the most successful and humane project on this continent, meet me right here, right now, and I’ll show you.

It’s a warm Tuesday morning. Nat and I are standing on the Oder Bridge, which crosses the river between Frankfurt, Germany and Slubice, Poland. The bridge acts as a border between the two countries, except that there is no border to be seen.

The bridge itself is vibrant with the sounds of cars and trucks and cyclists and pedestrians, all going about their business, crossing and re-crossing its length. An elderly couple smile at us as they pass by on their way back from the polish farmers market on the other side of the river. We smile back at them. They are pulling a fabric shopping trolley behind them which is brim-full with fruits and vegetables. A few metres further on, a young couple in their mid-twenties approach each other from opposite sides of the water and embrace. This is daily life, except that it wasn’t always the case here.

Today, there is nothing to indicate that we are straddling two countries other than our knowledge of the fact. Borders are human constructs, they are lines drawn on a map, created by greed and legitimised by fear. If you were to watch a sped-up history of mainland Europe from space, and if you could see each territory’s borders as real, physical things, you would witness a continual movement of these lines, ebbing and flowing like ocean tides, shimmering reflections against rock, as armies temporarily gain or forfeit each other’s land. What you wouldn’t see is the body count hidden in each of these incremental shifts, the human cost of these temporary ripples.

Within the lifespan of people still with us, the biggest body count inflicted on any one European country by another was that inflicted on Poland by Nazi Germany, resulting in six million Polish murders on the grounds of territory and ethnic cleansing. How could these nations ever face each other again? And yet, if you were to meet me today, right here, right now, you would find it impossible to tell that there was ever a conflict. What you would witness is a warm Tuesday morning, and people going about their daily lives. And this has been achieved without borders.

The genius of the European Union project is in its pragmatic ability to recognise human nature for what it is. It has redirected basic human greed into financial interdependence amongst its Member States, a simple idea really, that has converted some of the darker aspects of humanity into nearly seventy years of prolonged peace. It’s no coincidence that borders that have never stayed still have been static within Member State countries since the first manifestation of the EU, back in 1950. There are people who will tell you otherwise but, frankly, they are wrong.

As I write this, the word proroguing is entering the British vernacular, as Boris Johnson petitions the Queen to withhold that same Parliamentary Sovereignty that so many Brexit supporters believed they were voting in favour of. The Queen, for her part, has been politically boxed in, and has no choice other than to comply. Johnson is doing this in order to force an undefined Brexit on the British people. He is fresh in office and already is destined to go down in history, though I’m doubtful that history will speak kindly of him.

Britain is living through perhaps the only time in its own history when so many of its people have used their collective muscle to deliberately strip themselves of so many of their liberties and rights. ‘Taking back control’ was never written on the side of a bus, but its integrity is proving to be equally misleading. The British media certainly has ink on its hands every bit as indelible as that which can bring down a Shakespearean wife, and though so many of us have grown aware of the lies it perpetually spins, the newspapers march on with equal arrogance and certainty: ‘What need we fear who knows it, when none can call our power to account.’ Lady Macbeth didn’t make it to the final Act, and nor did she deserve to. I’m sincerely hoping that Johnson’s Government won’t either.

3 thoughts on “Adrian Sturrock: ‘This summer, I travelled through eleven European countries and from this I can tell you one thing: Nobody gives a damn about Brexit except the British.’”