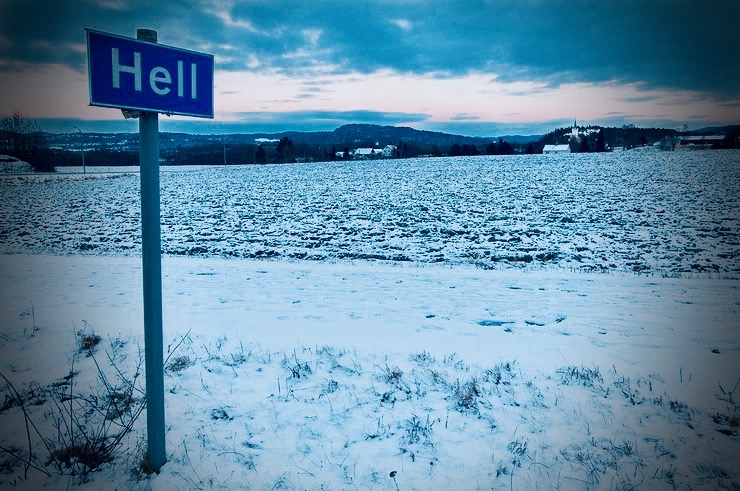 There is a place called Hell in Norway. And every winter it freezes over. It’s a small village of only 1,589 people, which leads me to believe that all those threats I received at Sunday School as a child were mostly exaggeration, and that you have to do something pretty fucking extreme to be sent to Hell. To learn this in later life, I’m filled with both relief and the feeling that I’d been played all those years ago.

As one might expect, Hell has a retirement home (read ‘has’, not ‘is’), as well as a petrol station, a grocery store, and a fast food stand for passing truckers. There really isn’t a lot to do here! Most significant, however, is that Hell’s railway station is not an end-of-line stop. A sign on its outbuilding reads, ‘Gods-expedition’, an archaic spelling of the Norwegian, ‘goods handling’.

As temperatures can be as low as -25 degrees in winter, one might be forgiven for assuming that sitting in the waiting room of Hell’s station would amount to purgatory, but, as everybody knows, Purgatory is in the United States. Maine, to be precise. (According to TripHobo, there is ‘little to do in Purgatory. It is a small place which is generally used as a rest stop before moving on to better things.’ Pretty much text book then!)

Unsurprisingly – and as I’d already secretly suspected – they play the Blues in Hell. The ‘Hell Blues Festival’ started in 1992 before being changed to the ‘Hell Music Festival’ in 2006, in an attempt to attract a more eclectic crowd. The result of this, only one year later, was bankruptcy. (Not even Goths go to Hell, it seems.) The following year, ‘Blues in Hell’ was re-instated and success returned as Hell reconnected with its true demographic. Last year, British singer/songwriter Jo Harman headlined here. (Having been born in Luton, Hell must have been an almost ‘back-to-the-womb’ experience for her.)

Those who know me understand that I’m not a fan of Blues music. In fact, I place it alongside war crimes and Morris Dancing in my list of ‘Under-No-Circumstances’. However, at a squeeze, I’d still place Blues above the questionable genre of Church Hymns, which leaves me in somewhat of a dilemma regarding my preferred afterlife destination. (Have you noticed how AC/DC fans can instinctively sing along to the entire back catalogue, while church-goers who attend their event every single week still need the hymn books? There is definitely a point to be made here.)

One of the benefits of living in the 21st Century is that one no longer has to rely on biblical supposition when it comes to the realities of Hell – not now that Hell has its own listing on Trip Advisor. A simple click of the computer mouse will tell you that Hell “wasn’t as hot as I thought it would be” and that “the train station […] is only serviced if you flag the train down.” This latter point, I feel, throws up its own existential questions.

The problem with Hell, of course, is fundamentally an ethical one: that its existence for the punishment of souls is inconsistent with a just, moral, and omnibenevolent God. On the other hand, according to lifeinnorway.com, “despite its proximity to the E6 motorway and an international airport, the village itself is remarkably peaceful. Typical Scandinavian wooden houses, well-kept gardens, lots of cyclists, kids playing in the streets: not what I expected at all!” As some schools of theological thought define Hell as specific to the individual (rather like Orwell’s Room 101), perhaps this particular town is set aside for those whose idea of torture is a recurring suburbia.

If this is not your Hell, however, don’t forget that there’s another one in Michigan, USA, another in California, another in Montana, and further Hells in Slovenia and Grand Cayman. They’ve even installed one on the moon, a lunar crater named after Maximillian Hell. Just like the song, Hell really is all around. (I am, of course, paraphrasing.)

I looked to see if Hell, Norway © has been internationally twinned with any other towns but, as yet, there haven’t been any takers despite the fact that the town can boast the honour of having produced the 1990 winner of both Miss Norway and Miss Universe (though I’m not sure how ‘The Beauty Queen from Hell’ reads on the world stage).

Hell doesn’t have a lake of fire but it does have a river and, until 1995, there was a highway to Hell, but it now goes around the village instead. And for those of you who have ever laid awake wondering, Hell is actually 14 metres above sea level. Now, that’s something the Apostles neglected to mention.

6 thoughts on “Adrian Sturrock: For obvious reasons, I’m publishing this article on a Sunday.”