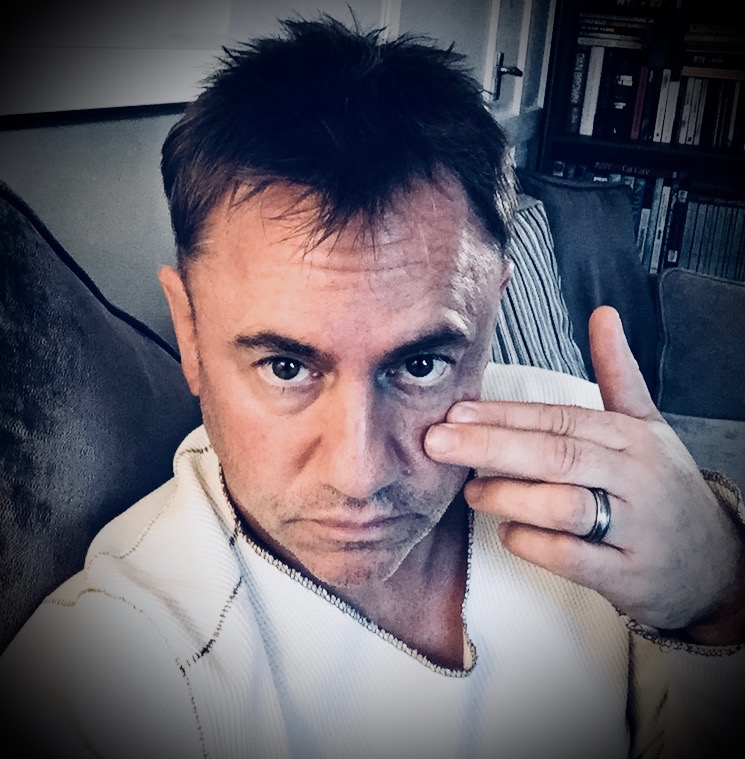 I’m sat in the kitchen at home. There’s

an article in The Telegraph: ‘Fifty ways to look younger’. It’s a disappointing read, filled with cosmetic advice and, no doubt, sponsored by the numerous high-street brands featured in it.

Still, I’m intrigued by a suggestion that I ought to start wearing tinted moisturiser. Apparently, one appears younger if one’s complexion looks even in tone. There’s also a thing about light-tinting one’s nostrils, but this merely confuses me so I let that one go. I look at my reflection in the kettle before adding tinted moisturiser below where my wife has written tea bags, on the magnetic shopping list attached to the fridge.

I put the newspaper down as I hear the front door open.

‘I got I.D’d for alcohol again, today,’ my wife shouts down the hallway, by way of a hello. Her tone is dressed up as annoyance, but I can sense the pleasure seeping through.

‘It’s so frustrating, though,’ she claims, ‘when all you want is a bottle of wine after a long day.’

‘Yes,’ I say, ‘it must be hell.’ I take two glasses down from the cupboard and place them on the table.

I think the last time I was frustrated was around Christmas 1998. Though, I was thirty-two years old at the time, so I reckon that’s a fair innings in the I.D. stakes. And I might even have enjoyed the moment, had I not been trying to chat up a girl at the bar, at the time.

There was a time when I’d have happily pretended that I was older than I was. I think that stopped around the age of twenty-one. After that, I was content to run with reality for a while. You can do that when reality is firmly on your side. But once ‘approaching thirty’ turned into a thing, volunteering my age became a more reticent affair. These days, I tend to just lie.

I should point out that I wasn’t born a liar; society drove me to it. Let me take you back to 1994:

‘What do you mean I’m too old for the role? It’s acting. And I fooled you. Isn’t that what I’m here for?’

‘Sorry, I’ve had explicit instructions from the director regarding the age limit of the actor for this part.’

‘… Tell you what, ask me the question again, and I’ll tell you what you want to hear.’

‘But I obviously looked the part during the audition. And I obviously gave a good enough audition, otherwise I wouldn’t be sat here filling out my details with you.’

‘I can only apologise, Sir.’

And that was the end of my acting career. There is, it seems, such a thing as too much truth.

‘That’s a shame,’ says Nat, as I relate this event to her over her I.D.-verified wine. ‘On the other hand, how would you have dealt with remembering all those lines? You can’t usually remember to put the bins out.’

Age: a number? An attitude? A countdown to death? Or merely a defining characteristic by which all of society judges you? My wife says that she wouldn’t want to live forever, to outlive everyone she loves.

‘Look at it the other way around,’ I say, ‘The idea that, one day, the party will go on without me is something I find quite traumatising.’

‘I really don’t think you’re going to find a way around that particular inevitability,’ she says.

‘Apparently, ageing is not in their DNA. Perhaps there’s a university biology unit somewhere that I could attend, to have lobster DNA intertwined with my own. They must need volunteers.’

‘Really. So how does the lobster population balance itself?’ Nat asks.

‘They merely keep feeding until they grow to the point where they become too heavy to hunt … and then they … starve to death.’

‘Well, good luck with that one.’ she says, raising her glass to salute my suggestion.

There’s a knock on the door. ‘I’ll get it,’ I say, happy to step away from my point, which I’m clearly failing to make.

At the door, there’s a utilities salesman asking me if I’m aware that I can easily change my current provider, while saving on my monthly bills.

He seems surprised that I’m not fighting back.

He quickly pulls out his paperwork and begins to fill it in on my behalf, presumably before I can change my mind. He asks me my name, my current provider, etc.

‘And what would be your year of birth?’

I don’t smile back.