Student : How do you spell enquirement?

Me: Do you mean enquiry?

Me: There’s no such word.

Student: Yes there is.

Student: Yeah, but there is though.

‘And this is my work day. Every day.’ I say this to my wife as we are sitting in the back garden, drinking wine and watching the sun go down over the trees at the far end.

Nat doesn’t respond, she just smiles. She opted to take a job in which she manages actual grown ups, while I went for the thirteen weeks holiday per year approach and got into secondary school teaching. At least I had the foresight to quickly drop teaching English, in favour of teaching Business, which means that I don’t have to teach little people. Business isn’t taught lower down the school. A cunning move on my part, I thought.

‘At least you teach the more mature students,’ Nat offers.

‘Not that you’d notice,’ I say. ‘Last week I found myself in conversation with a fifteen year old who was speculating on how many months there may or may not be in a full calendar year.’

‘To be fair,’ says Nat, ‘it doesn’t get much easier managing adults.’She pours me another wine.  ‘I’ve had my fair share of staff for whom, in honesty, if brains were dynamite, their hats would remain firmly on.’

After all is said, however, my wife enjoys her job. She says she would continue to do it no matter how rich we were. I don’t understand this, though I accept that she believes what she says. For me, the day job is the price I pay for not being clever enough to work for myself. I ponder this as the last streaks of red sky disappear behind the trees.

‘You could achieve the same by becoming a politician,’ Nat reminds me.

‘Good point,’ I say. ‘… I’d rather not dirty myself by mixing in such company. 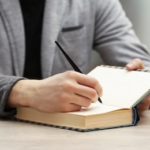 Rolling Stones guitarist, Ronnie Wood, is about to publish a book of concert set lists that he’s written out in his best handwriting. He’s a fan of magic marker pens, apparently. When you’re a celebrity, this is all you need to do for a book deal.

‘Celebrity sells,’ Nat reminds me. ‘No matter what the product is.’

She’s right, of course. I need to celebrify myself if I want to unchain myself from the day job. But how does one do this? I write books. They sell well enough, but not well enough to give me the kind of celebrity that would help me sell more books, which, in turn, would increase my celebrity status further … in order to sell more … and so on.

‘Think about how other celebrities get themselves publicity, and copy them,’ Nat suggests.

‘I’m not sure the world is ready for another leaked sex tape from me,’ I say.

‘I really wasn’t … Oh, never mind,’ she says, looking oddly at me.  ‘Perhaps you could shout your chapters from the rooftop of Apple Corporation, in Savile Row, just until the cops arrive, thus re-enacting The Beatles impromptu 1969 gig. Though choose a warm day if you want people to stick around.’

‘I don’t feel you’re taking this conversation seriously,’ I say. ‘Should I also consider floating a pig over Battersea Power Station?’

‘On the other hand, no matter how successful you become, you’d always just be Adie to me.’

‘Even Jesus was just ‘the carpenter’s kid’ in his home town,’ I say.

‘Are you comparing yourself to Jesus?’

The next day, I’m back at work.

Student: My dad says there isn’t a silent ‘Q’ in Enquirement

Me: Really? How would hespell it?

One thought on “Adrian Sturrock: ‘I’m not sure the world is ready for another leaked sex tape from me.’”