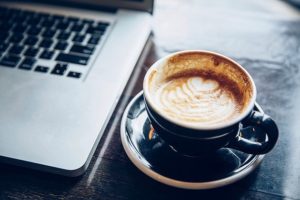 This isn’t a question that I would have anticipated from one of my students – mostly because I teach Business.

‘Why would you tell either of them?’ I ask.

‘Well, it’s about honesty, isn’t it,’ he says. ‘You shouldn’t lie to your children.’

‘Well? Which one?’ he insists.

‘The ugly one, obviously,’ I say. (Hey, I’m already riffing on a ridiculous conversation!)

‘They’re lucky to have you at that school,’ says Nat, as she pours another drink.

We’re sat in the garden enjoying sunshine and squirrels. In a few days, the summer holidays will have started and I can pretend that I’m unemployed for the next six weeks. This is by far my favourite part of my job – the not going to it.

‘What are your plans for the holidays? Nat asks.

‘When we get back from our trip, it’s back to office hours for me,’ I say, ‘until I finish the book.’

‘You’re the only person I know who works harder during their time off than they do during their day job,’ she says.

It’s not the idea of work itself that I hate, it’s the lack of opportunity to be myself that I resent. I love my ‘not-the-day-job’– my writing life.

‘Once I get to sell the film rights to the novel I haven’t yet written, I can give up the day job and become a tax exile,’ I say. ‘Alternatively, I could try selling superfluous bits of myself. How many kidneys do I have?’

The best thing about keeping ‘office hours’ as a writer is that the ‘office’ is wherever one choose it to be – it’s just me and a laptop. I have a shortlist of cafes, restaurants and bars that I alternate between and, in summer, I might add the odd park, riverside or, occasionally, a beach to the list. This comfortable detachment from the world makes me ridiculously happy. It’s all about this and travel; everything else can go to hell.

‘But how do you deal with writers’ block,’ asks my friend, Jason.

‘By denying its existence,’ I tell him. ‘I’m always either in the driver’s seat or the passenger seat – either way, It’s all about moving forwards. If I know what I’m writing about, I drive the experience; if my mind is blank, I’ll riff off whatever comes out of my pen. Me and my pen swap driving duties a lot.’

My ‘Not-the-day-job’ does, however, come with a very tough boss who reviews my work on a regular basis, and with brutal honesty. I generally refer to this boss as my wife, though Grammar Nazi fits her equally well.

‘I learned from the best,’ she tells me. ‘As a child, I remember walking past a butcher’s shop in Somerset with my grandmother, when she suddenly picks up the chalkboard that’s pitched outside, takes it into the store and demands of the butcher, ‘Tell me what’s wrong with this sign’. That’s how I learned to spot whether an apostrophe was in the wrong place. She was the same grandmother who would mark my ‘Thank You’ cards with red pen and send them back to me. She was very cool!’

Turns out she was also the person who taught Nat basic French. At the same age, I was still in Wales, nursing the psychological damage brought on by my bowl haircut, and bouncing tennis balls off passing cars. Our beginnings were not similar. 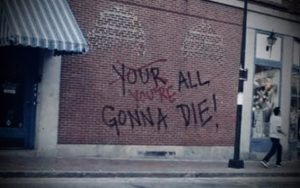 If I can’t yet give up the day job, I can at least find ways to lessen its impact on me, on my time, and on my writing. I’ve recently been having discussions with my current day job boss, which has resulted in me leaving work today with a big smile and a touch of the Geldorfs about me. Roof down, I found myself revving my way out of the school premises while singing at the top of my voice: ‘I don’t do Mondays, I don’t do Mon-da-ays’. (I had requested Fridays off – but it’s a start.)

‘All I have to do now is make enough money from Mondays to afford to give up Tuesdays … and so on,’ I say to my ‘not-yet-the-day-job’ boss, Nat.

‘Well, you’d better not be rubbish then,’ she says.

This is the start of my freedom … and my paranoia. But at least I have my Grammar Nazi to keep me focussed.