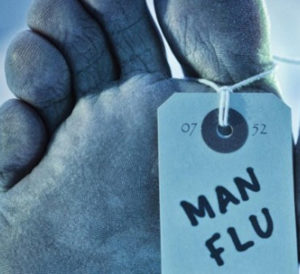 It’s 7.35am. I’m sitting up in bed. My wife is rushing around the room, partly getting ready for work, partly packing for the few days she will be away in Somerset, looking after her sister’s children.

I’m ill. Who’s going to look after me?

As she turns to leave the room for the last time, she looks around, leans over the bed and kisses my head. ‘Look after yourself, and stay hydrated,’ she says, holding a cold hand against my forehead to check my temperature. ‘There’s some ice-lollies in the fridge. Try not to eat them all at once.’

‘I’ll try not to look like crap when you see me next,’ I reply. ‘Who knows, I may even shower.’

‘That would be nice.’ She smiles and kisses my head again. ‘Be good.’ She leaves the room and I listen to her descending the stairs, towards the front door.

‘Nat!’ I call, but it’s too late; the front door slams shut and I hear her heels echo on the driveway as she walks towards her car.

‘So close and yet so far away,’ I say to myself, thinking of the ice-lollies in the fridge. The mere idea of embarking on the monumental trek to the kitchen makes my skin hurt. Right now, everything hurts, and I’m so full of snot that even my cheekbones ache. On the other hand, I could be at work. I count my blessings.

I reach for the TV handset that Nat has thoughtfully placed on the duvet beside me, but find myself trapped between Piers Morgan and old re-runs of The Waltons. I switch the TV off and decide an ice-lolly is an acceptable reward for the pain I am about to endure in the hunter-gathering of it.

It’s 11.05am when I wake, face down on the sofa in the living room, lolly stick still in my hand, lolly wrapper stuck precariously to my left cheek.

I reach upwards to catch my reflection in the mirror above the fireplace. Oh no, was that really the last visual memory that Nat had of me this morning as she left for Somerset? Three days of beard growth, hair matted to my head in the most bizarre fashion, and red, runny nose and eyes. At least she won’t be able to cite ‘irreconcilable differences’ in the divorce court – we both agree that I look like shit.

A text pings up on my phone: ‘Whatcha doin?’ It’s Nat.

‘Contemplating cosmetic surgery,’ I write, but then erase it, sending her ‘Missing you,’ instead.

‘Don’t forget that the Ocado groceries delivery is due this evening between 7-8pm,’ she reminds me.

‘I can hardly wait!’ I reply, wishing that the text function offered some kind of sarcasm emoji option.

‘Just making sure you’ll be around,’ she texts.

Where did she think I’d be? I’m dying here.

‘You looked very cute in bed this morning when I left,’ she adds

‘Are you sure you’ve got the right number,’ I reply.

A moment later, her response is a selfie image, all cross-eyed and tongue out, holding her hair up in a crazy, messy pose.

‘One day, when I’ve consumed enough human flesh to bring myself back to life, I will hunt you down like a dog!’ I text back

‘You’re going to need a lot of human flesh to pull that one off,’ she replies. A moment later, her text is accompanied by ‘I’m just leaving the office, make sure you drink lots.’

‘This is no time for alcoholism,’ I respond, but the conversation is over and I return to the kitchen for a follow-up lolly.

I open the freezer door and lift out the ice-lolly box. It’s empty. I am bereft.