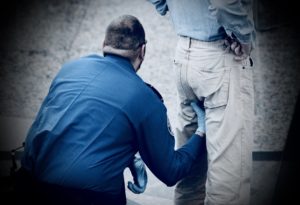 ‘Thank you for your cooperation,’ says bag x-ray man, having, in my opinion, frisked me a little more than comprehensively. To be honest, I’m feeling slightly violated. ‘Have a pleasant journey,’ he says, as he finishes touching my trousers, and steps away.

‘Phone me,’ I mouth, glancing back at him as Nat drags me from the scene. I’m miming at him the placing of my phone to my ear. Sarcasm without words. I’m quite proud of myself.

‘It’s always you who gets frisked,’ she says. ‘Every time.’

‘You say that as though I put in a request along with our booking,’ I say. ‘… In other news, do you think I have a terrorist’s face?’ I catch my reflection in the chrome pillars to our right.

‘I’m not sure what a terrorist’s face looks like,’ she says, ‘but you clearly have a face that courts suspicion at airports.’

‘I’ll take that as a compliment,’ I say, thinking that maybe I do stand out in a crowd after all.

Suspicious that I might still have more to say to the security officials who appear perched on either side of us like a row of jaded chancers surveying potential prey, Nat takes the black plastic tray containing my hand luggage, electricals, wristwatch and stated pieces of clothing from the conveyor belt of the x-ray system and places it firmly into my hands before using it as a handle with which to waddle me speedily away from the area. I say waddle because my belt is still sitting in the tray, forcing me to walk with a much wider gait than usual, lest my trousers falls down. I’m wondering whether anyone can see my underpants at this point. I’m also wondering which ones I put on this morning. I hope they’re nice ones, just in case.

Eventually, she parks us in a corner of the room and places my tray on a high stool so that I can collect up my things.

‘In case you were about to start up a conversation that you might come to regret,’ she says.

‘I was only going to say that if I was thinking of becoming a terrorist threat, there are a number of ways in which I could probably outsmart security.’

‘Just because I have a container that says Aqua de Gio on the bottle, it doesn’t mean that I actually have Aqua de Gio in the bottle.’ I’m holding up the little plastic pouch that the airport provides for all flight passengers to cram their cosmetics, toiletries and various other bits and pieces into. Aqua de Gio is my new perfume; a Christmas present from Nat. I quite like it.

‘Yes, I know,’ she says, ‘they probably make a fortune out of handing out little plastic bags while stealing all of our possessions that don’t fit into them, in order to make us re-buy the same things in the pretend duty-free shops.’ 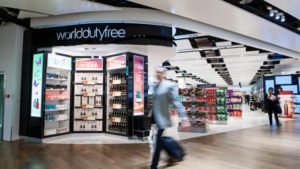 We are now standing in WH Smiths. It’s pretty much the first shop that we come to as we enter what used to be called Duty Free. These days, there is no discernible difference in price between items bought here and any other captive-audience rip-off retail opportunity, except that, here, they also want to see my boarding card before accepting payment.

‘It’s a bit intrusive, don’t you think, demanding to know where I’m about to run off to with a copy of Esquire magazine?’

‘Then I’m not allowed to serve you, sir.’

‘So, for the sake of finding out where Sean Penn sits in this year’s list of ‘Best Dressed Men’ (I point to the picture on the magazine’s front cover) I am required to forfeit personal information about myself? Do you not sense a certain unreasonableness about this?’

‘Just get on with it,’ says the man queuing behind me.

I turn around. ‘It’s your rights I’m fighting for too,’ I say. ‘As Malcolm X said, “A man who stands for nothing will fall for anything”.’

‘What are you talking about?’

‘… I don’t know, I don’t think that was the quote I was looking for.’ I turn back to the checkout guy. ‘Anyway, I think this is a breach of GDPR.’

‘I wouldn’t know about that,’ he says.

‘How much is it? Here, take this.’ Nat has found me amongst the commotion of the queue and hands over her boarding pass and her credit card for my magazine.

As he bags my purchase, Nat turns to me and whispers, ‘I may very well decide to become a Miss if you continue to make a scene wherever we go.’

‘Do you think I look pretty today?’ I ask.

She stops and glares at me, but her glare doesn’t last long and soon turns into a smile. ‘Yes,’ she says, ‘you look pretty today.’

I turn to the man behind me in the queue. ‘I look pretty today,’ I say.

Nat takes back her boarding card and my magazine and leads me out of the shop. ‘Let’s find somewhere to sit,’ she says.

‘Why did you pay for my magazine?’ I ask. ‘I was about to refuse it on ethical grounds.’

‘Well, it was partly because I know you actually want it, and partly so that your mouth doesn’t have to keep moving when we get on the plane. Now I come to think of it, it was mostly the second reason.’ 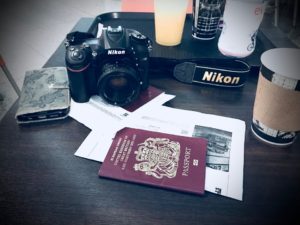 I’ve told everybody that we are flying to Andalusia. I’ve said Andalusia because if I say Costa del Sol anybody reading this will automatically think of high-rise apartments, English bars (and Irish ones), and the tourist triteness that Nat and I take great pains to avoid at all costs.

Once on the plane, Nat passes me my magazine.

I point to the picture of Sean Penn on the cover. ‘He was great in Dead Man Walking,’ I say.

‘He’s pretty good in all his movies,’ says Nat.

‘Yes, but any actor who can make me feel so acutely sorry for a murderer and rapist gets my vote.’

‘Tea or coffee, sir?’ asks a concerned-looking hostess whom, I fear, may have caught only the last pieces of that sentence.

I decide to move us on from this unfortunate tableau as quickly as possible. ‘Did you know that Semtex now comes in pastel shades?’ I say.

Nat kicks my ankle. ‘What did we agree before we left this morning?’

On the day of our return, I do my usual reconnaissance of the airport, dreaming up ways to circumvent security (much as I have done since I entered my first airport, aged thirteen), only to be picked on by security because of a loose bottle of Aqua de Gio that is sitting in my hand luggage. I’d forgotten to put it into the appropriate little plastic bag.

‘For security purposes,’ our new X-ray man tells me.

He directs me to a coin machine where I can now purchase two plastic bags for one Euro. Not wishing to be parted from my Aqua de Gio, I comply, though I don’t have any change on me so Nat now has to help rescue the same perfume that she has already spent good money purchasing for me.

I thank her, but also feel the need to enquire how me putting my Aqua de Gio into a little plastic bag will render the 300 passengers on our easyJet flight to Malaga somehow safer. I can’t help wondering why the UK spent £222 billion on defence last year when a job-lot of little plastic bags would have sufficed. Someone’s taking a generous back-hander, I think to myself.

‘These are the rules,’ he tells me.

‘There’s a lot of rules,’ I say, though I don’t point out the questionable nature of this lunacy, partly because I’m in good spirits after a week away from the bland worlds of work and British weather, and partly because I’m standing in my socks on a cold tiled airport floor while holding my trousers up because my belt is currently busy saving the world from terrorism, in a black plastic tray, in an X-ray machine, in front of me. 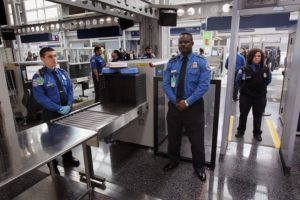