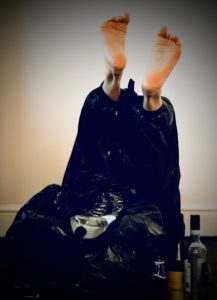 ‘Stop!’ I shout, as my wife reaches into our kitchen cupboard and pulls out an old plastic Marks & Spencer bag to put rubbish into.

She turns the bag over in her hand. ‘Why not?’

‘That could be a collector’s item, one day.’

Nat looks at me, then back at the bag, before rolling her eyes and continuing to pour her rubbish into it.

‘You’ll regret it when our currency plummets and it’s only our carrier bags we have left to barter with.’

‘If we ever get to that stage,’ she says, ‘I’ll probably sell you for medical experiments and make up the shortfall that way.’

Bag-for-life suddenly takes on a whole new meaning in my mind. ‘I see how it is,’ I say.

It’s all David Attenborough’s fault, of course. First it was plastic straws polluting the sea, then it was vast floating islands of carrier bags that could be seen from space, and now it’s the ocean of self-blame that I carry with me regarding how people I can’t control package my food.

I care, but I’m frustrated. In fact, I’m frustrated because I care. We’ve just shopped, and the inside of our fridge has suddenly become a potential subject for a thesis on environmental morality. I open the door and the light comes on to display a vulgar grotto of plastic packaging reminiscent of a dystopian game show grand prize reveal. These days, I find that I eat to forget as much as to hide the evidence. You can actually measure my guilt in calories.

‘This is the downside of online shopping,’ says Nat, ‘You click the product but you don’t always see the wrapping until it’s too late. ‘

She’s got a point, but why does every convenience in life have to come with a moral price-tag? It took me three years to get her to agree to trying internet shopping – mainly because she says she prefers to squeeze her own fruit before she buys it.

‘But what about when you send me to buy the fruit?’ I say. ‘You don’t get to squeeze it then.’

‘I trust your squeeze,’ she says.

I suddenly feel a wave of pride from this statement, though I’m not altogether sure why.

‘But the shop people are professional squeezers,’ I say, ‘They squeeze for a living. I can’t even claim to squeeze as a hobby.’

‘Where is this conversation going?’ she asks me.

A few days later, there’s a knock at the door.

‘Is that my package?’ I ask Nat, as she moves to answer it.

She stops in her tracks. ‘… Hang on … nope, my telepathic ability doesn’t seem to be working at the moment, I’m going to have to actually answer the door, this time.’

She leaves the room.

She comes back with a large parcel. ‘What is this?’ she asks, handing it to me.

‘I found an online shop that sells paper carrier bags,’ I say. I thought we could split the package in half and keep a stash of them in the boots of our cars – a first step towards cutting down on our plastics consumption?’

The irony of the fact that this supply of ‘eco-friendly’ shopping bags comes rolled up in its own plastic packaging doesn’t pass us by. ‘Small steps,’ I say. ‘Small steps, if we are going to stay ahead of al-Qaeda.’

‘Apparently,’ I say, tilting the news item on my iPad towards her. ‘Al-Shabaab, the Somali militant Islamic off-shoot of al-Qaeda has already banned single use plastic bags, citing them as a serious threat to humans, livestock and the environment – just like the group itself, allegedly. I guess this technically makes them the world’s first “eco-friendly” jihadist movement.’

Nat just looks at me.

‘Yes, me too,’ I say. ‘These aren’t words that I had expected to have fall out of my mouth before 8am on a week day.’

‘It doesn’t seem to matter what day or time it is,’ says Nat.

‘I’d hate to think about how this group goes about enforcing its ban, though’ I say, ignoring her.

‘If you’re seen with a plastic bag, you’ll probably end up with your head in it,’ Nat suggests.

‘I like that you always manage to disturb me just a little,’ I say. 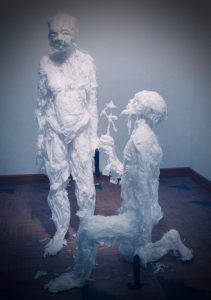 Later that day, I’m driving home when Nat calls to ask if I can pick up some things on my way. This is clearly a rhetorical question as she has already texted me with ‘a small list’.

‘Sure you still trust me to squeeze for you?’ I ask.

The car park at Tesco is full when I get there so I’m forced to park at the very end of it, far from the shop’s entrance. Just my luck, it’s a horrible day of high winds and rain. Apparently, someone at the Met Office who’s job it is to name the weather tells me that this is Hurricane Gareth. ‘Must be a strange day job to have,’ I think to myself as I run across the car park, narrowly missing two cars and a runaway trolley.

As I emerge from the shop, the rain is coming down harder. I race myself and my shopping across the car park, soaking us both by the time I’ve reached the car, fumbled for my keys, and got inside.

This panic is repeated at the other end of the journey, once I’ve parked outside the house. The heavens are now fully open and I can feel the heavy rain drops patting me forcefully on the head as I get out of the car. I grab the shopping bags, which are now getting quite soggy, and turn to make a dash for the front door.

Suddenly, I hear a crash and one of my bags feels lighter. A neighbour walking his dog stops to look at me. I look at him and then down at my feet. One of my new paper carrier bags has got so rain-soaked that it has split and emptied itself across the pavement. I look back up at the man with a sad expression on my face. ‘’My wine,’ I say. ‘It’s my wine.’

I pick up as much of the broken glass as I can and wrap it in the remains of my paper bag. ‘Dereliction of duty, that’s what this is!’ I shout at the soggy remnants of my pro-environmental attempt.

The man with the dog clearly decides that this is the time to walk on.

Later, I get a text from Nat: ‘Did you manage to get everything on the list?’

‘Bloody David Attenborough,’ I text back. 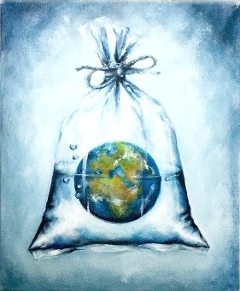 * Image two from the collection, “Emotional Trash, by  Khalil Chishtee

2 thoughts on “Adrian Sturrock: ‘The best thing about the new 5p carrier bag charge is that the cupboard next to our sink is now worth £2,987.’”