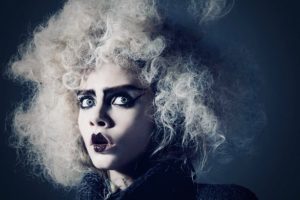 I’m relieved to say that I married one of those women whose eyebrows are already on when she wakes up in the morning.

You may think that this is an odd thing to consider but it seems that twenty-first century brows are not something to be taken for granted. I lived with a previous partner for five years before I found out that hers were not what they pretended to be. I’m all for shaking up a relationship once in a while but ‘imposter-brows’ was never what I had in mind.

Having said that, I’ve also met women whose eyebrows were not where I thought they were. It’s a strange thing, fashion. Women argue that it’s a misogynist society that forces females to strip themselves of their natural brows and then to paint them back on again – often in a different place – but I wonder whether this is an over-simplistic view.

I’m offended. I have never in my life sided with the idea of macho, and the role of the white van driver is not something I’ll be applying for soon. In fact, my teen years were probably single-handedly responsible for keeping Boots’ Number 7 range in business. Mine was a music-related fashion, but there was undoubtedly more than a little of the anti-macho lurking in there somewhere – a two fingered solute dressed in ice-pink gloss.

‘I’m not suggesting that we don’t live in a society where gender politics creates unreasonable expectations and pressures,’ I offer, ‘but I’ve never heard a guy say, ‘Check out the eyebrows on her’… at least not until recently.’

Nat decides that I’m currently not worth talking to and leaves the room. 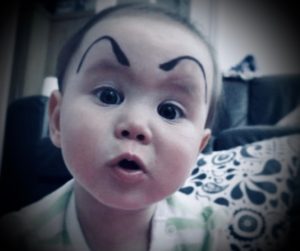 That afternoon, I’m sitting in my optician’s waiting room, wondering whether the recent deterioration in my eyesight is due to bad diet, late nights, or over-use of my mobile phone. The last thing I’m prepared to accept is that it might have something to do with age. (I’m going to ask my optometrist whether computerised implants is a thing yet, and whether I can afford them.)

I’m skimming through the magazine selection stacked on the small table in the corner of the room. It’s almost all women’s reads. I’m tempted by a title that I’ve not heard of before – The Vagenda, but someone has stolen the inner pages, leaving only the outer cover behind. (I consider the metaphorical significance of this for a few seconds before confusing myself and letting the issue go.) I’m guessing that this is a feminist publication of some sort? Something for another time, perhaps. I settle instead for a safer title, covering lifestyle and fashion.

A few pages in is a photo of the model, Cara Delevingne, sporting perfectly sexy, full eyebrows above ice blue eyes. I take a pic of her on my phone and send it to Nat with the words, ‘See, fake eyebrows not required!’

‘Stop perving at models in the eye shop,’ is all I get back.

I put my phone away, but then take it back out again: ‘I used to keep fluffy caterpillars as pets when I was a kid,’ I write. ‘I collected them from the garden and kept them in jam jars filled with grass and twigs. Sometimes, I’d smuggle them into the house at night but other times my mum would catch me and make me take them back outside.’

It takes a moment for Nat to reply: ‘Why are you telling me this?’

‘I was thinking about eyebrows,’ I write.

I persevere: ‘One time, when my mum made me take the jar back outside, it rained and the thing filled with water due to the air holes I’d made in the lid. By the time I got to check on my caterpillars, they were floaty.’

‘I was referring to you,’ she texts.

Soon, I’m called into the optometrist’s room. I ask about bionic eyes but I’m told they don’t do them yet.

On my way out, I pass a young girl and her mum in the waiting room. The girl is around three years old and is drawing a big scribbly face on a large sheet of paper, using a variety of fat crayons that she is holding in her fists. I smile at her as she looks up at me. Her mum is sat beside her. I look from what the child has drawn on her paper to what her mum has drawn on her own face. ‘She has your talent,’ I say, as I pass them both.

‘Thank you,’ says the mum, smiling.

That night, I dream of Nat taking her eyebrows off at bedtime and placing them into a glass of water beside her. I wake in a sweat and reach over in the darkness.

‘What are you doing?’ she says.

I find myself touching her face, feeling for her brows. ‘Just checking,’ I say.

2 thoughts on “Adrian Sturrock: ‘My biggest shock was when I wiped away her tears … and her eyebrows followed.’”