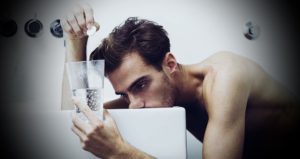 ‘You know why birds sing in the morning?’ I say to Nat, utilising the sandpaper tones of the amateur drunk, ‘Because they don’t have to go to work after only 4 hours sleep and three bottles of Pinot Grigio.’

‘Well, you did it to yourself,’ she says, dismissively.

I hate all that you’ve-only-yourself-to-blame nonsense. There’s no satisfaction in blaming oneself. ‘No,’ I say, standing my ground, albeit while hunched over the bedroom chest of drawers with my head in my hands, ‘YOU did this to me. It wasn’t me who picked up a caseload of wine on their way home from work.’

‘And it wasn’t me who made you drink it,’ she says, eyeing me in the mirror while applying her lipstick. ‘I don’t have a hangover.’

I’m not a fan of smug, either (unless, of course, it’s coming from me). ‘But you laid them all out in front of me,’ I say, miming her pulling bottles from the box and setting them in a row. ‘What was I supposed to do?’

‘How about … I don’t know … exercise judgement?’

After a delicate morning and a full day at work, we are now to spend the next four hours driving to Wales in order to celebrate my mum’s birthday. There are three reasons why Nat is driving this evening (four, if one considers that I may still be drunk):

Anyway, this means that I am relegated to the position of commuter for the entirety of this journey, which is fine by me. My job is simple: I am to be DJ and conversationalist only. These two tasks are ones that, I feel, I can be trusted with.

Fifteen minutes into the journey, I’m still trying to find something on Nat’s music system that I like.

‘I’m trying to find something good,’ I say.

‘Rude!,’ she says. ‘And anyway, on this journey, you are the DJ and I am the audience. It’s not about you.’

I set her music to random play and put the iPod down.

‘I aim to please at least one of us,’ I say, grimacing at her.

‘Talk to me. You’re meant to be my DJ and conversationalist. Tell me things.’

I think hard, trying to push away the clouds of sleepiness that are gathering in my head. ‘Um … Indian police officers get paid more if they have moustaches,’ I say.

‘Why would they get paid more for that?’

‘Something to do with a belief by bosses that underlining their noses gives them an added air of authority?’ I say, ‘Though I’m probably paraphrasing.’

‘Added ‘hair’ of authority,’ I say, attempting to stretch a little more humour from my random fact. I search for proof of my claim on my phone, and stumble upon a Daily Telegraph article from 2005, entitled Indian police pay goes up by a whisker. ‘See,’ I say, waving my phone screen in front of her.

My mind drifts off into the online article and Nat and I fall silent as she drives, her iPod continuing my Dj-ing work for me. I’m considering how much money a job would need to pay me before I might agree to whoring facial hair for it. It’s bad enough that I have to wear a tie at work. ‘Archaic nonsense,’ I aside to myself.

I’m in mid decision that such a price doesn’t exist, when Nat sounds up to remind me that I have again abandoned my car duties.

‘I’m sorry,’ I say, ‘The easiest jobs have always been the ones I’m most rubbish at. I think this is because I get bored so easily.’

‘I’m sorry I’m boring you,’ she says, in her best sarcastic tones.

‘You’re not,’ I say, ‘but when I’m bored – generally – I forget to pay attention. It’s the easier jobs that I’ve tended to get fired from.

‘I took a waitering job at a fish restaurant, once. I was terrible.’

‘Money?’ I say. ‘There was a time when I could hardly afford to pay the electricity bill. Those were dark times.’ I leave a space for Nat to catch up with my amazing comedy.

I sigh and move on. ‘I was so bad at waitering that I felt it was only a matter of time before the whole restaurant industry would add the word ‘syndrome’ to my surname when teaching new recruits how not to do stuff.’

‘You weren’t a natural, then?’

The two guys who ran the restaurant were a difficult pair to please, and an impossible combination to work for. I didn’t go to restaurants while I was growing up, we were too poor. The closest to eating out we experienced was my mum serving chips in rolled up copies of The Daily Mirror, and sitting us on the garden wall in the sunshine to eat them. So, when I took this job, which came with no induction or training, and was expected to decipher the ridiculously embellished menus – which changed weekly – I quickly found that I was out of my depth:

Me (speculating wildly): I believe the chef passes a small charge through it, sir.’

Diner: ‘And the Frightened monkfish? Frightened? Really?’ (He points to the offending
word on the menu.)

Me: If you were suddenly hauled out of the sea by a big-faced, gnarled-looking old
fisherman, wouldn’t you be just a little panicky?’

Me: ‘With or without the crafted marrow balls, sir?’

Diner: ‘Tch. You can’t beat this chef for his pretentiousness.’

Me (leaning in closely and whispering): ‘You could with a long enough stick, sir.’

During the shift in which I was fired, I pointed out to the owners, while waving their menu at them, that, ‘Just because nobody complains, that doesn’t mean that all parachutes are perfect.’

I don’t think they understood my meaning. 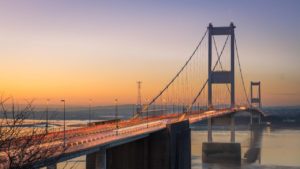 ‘What are we going to have for dinner this evening?’ Nat asks me, as we watch the sun set over the motorway.

‘Well, as my mum is organising our meal, it’s likely to be hand-selected artisan goujons of organic, free-range pollock, dusted in a light jacket of deconstructed ciabatta, and crisply sautéed, served on a bed of hand foraged potato julienne, and complimented by a foray of locally harvested pureed micro greens and, finally, served with an optional Pomodoro and vinaigrette reduction.

‘Sorry, you lost me at goujon,’ says Nat.

‘Fish and chips with mushy peas,’ I say.

2 thoughts on “Adrian Sturrock: ‘It’s the easier jobs that I tend to be most rubbish at.’”