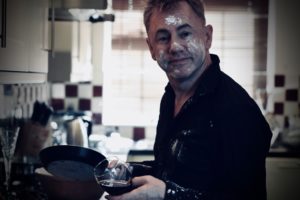 I’ve managed to get home early from work so I’ve decided to use my time constructively by doing nothing productive whatsoever. I’m not very good at this so I’ve decided that some self-discipline is in order.

I’ve chosen a movie, which is sitting in its case on the kitchen unit beside me, and am currently making a quick snack to go with the cup of tea that I’m about to put my feet up with. As I prepare this, I flip on the radio. The DJ is playing a retro montage of ‘70s songs. At the moment, ‘How deep is your love?’ is filling the room.

After a few choruses, I feel compelled to confront this quite frankly disturbing line of questioning. ‘Mr Gibb,’ I say, turning to address the radio as I take the milk out of the fridge, ‘I really don’t know how to answer your question. And, more to the point, I’m really not sure I want to.’ I leave a space for the significance of my words to sink in before adding, ‘Oh, and … Hashtag: ‘Me-Too?’

I fear he’s taunting me. ‘Does your wife know that you go around pestering innocent people with your inappropriate questions?’ I ask this as I pour hot water onto the tea bag in my cup. I’ve decided that I’m not going to shy away from his harassment a moment longer.

‘Who are you talking to?’ asks a voice behind me.

I jump and spin around, pouring hot water across the work surface and onto the floor. ‘I … um … I didn’t hear you come in,’ I say.

Nat looks at me and then down at the mess I’ve made. ‘Could have been worse’, she says, ‘I could have phoned you while you were ironing.’

I subconsciously touch my ear as I reach for a cloth to wipe up the mess.

‘Anyway, hello,’ she says, before repeating, ‘Who were you talking to just then?’

‘Gibb. Barry Gibb. Off of the Bee Gees. He seems to have taken it upon himself to start asking me unbefitting questions. Quite honestly, he was getting a little creepy just before you walked in on us. I was just letting him know that I’m not that kind of guy and that I don’t appreciate his approach.’

Nat rolls her eyes. ‘His “approach?” You do know that it’s not all about you, right?’ She smiles at me as she takes off her shoes.

‘That’s the problem with celebrity,’ I whisper, covering the sides of the radio with the palms of my hands, ‘It so often goes to people’s heads. To be honest, I think he might be stalking me.’ I remove my hands and continue to dry off the last of the water on the floor.

‘I bet he’ll have forgotten all about you by tomorrow,’ says Nat.

‘Did you just say wine?’ she corrects.

Barry eventually desists, and we go into the lounge, in order to … lounge.

‘Why are you home so early,’ I ask, realising that my movie-watching afternoon is now seriously in jeopardy.

‘I thought I’d take a few hours off,’ she says, ‘so that we can make pancakes together.’ She points to a small bag of ‘stuff’ that she has brought home with her.

‘Why not.’ She replaces my tea with a glass of wine and a smile.

‘Thank you,’ I say, returning the smile but keeping the wine. ‘What’s a shrove?’

‘Exactly that,’ she says. ‘It’s a crazy, mixed-up world, isn’t it? But, these days, the “mixed-up” comes in a handy-sized packet.’ She pulls out a batter mix sachet from her bag. 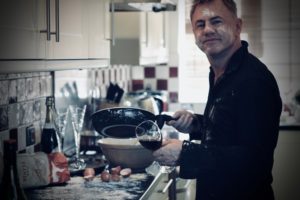 Not everything is convenient, however. Apparently, the highest ever successful pancake toss was achieved in New York, in 2010, at 9.47 metres. Unlike New York, though, our kitchen has a ceiling. This ceiling comes in at just under 3 metres, which is why, as I explain to Nat, my pancake tossing doesn’t seem to be going so well.

In her attempt to encourage me to take a full part in our ‘shrovery’ (I just made that word up), she says nothing, though I do notice her knuckles whitening a little around her wine glass as she surveys the mess I’m making.

‘Um … Not a problem,’ I say as I hand her the first of the pancakes that haven’t attached themselves to light fittings or kitchen appliances. ‘Fourth time lucky?’

‘Apparently, in medieval times, the first three pancakes cooked were sacred and were marked with the cross before being set aside to ward off evil.’

‘I’d clearly make a good Christian,’ I reply, ‘though other religions are available.’ I say this as another piece of pancake slips past us from above, and lands limply on the floor for the cat to survey. This is the point at which I realise that I will probably have to forego any idea of relaxing with a movie, in favour of cleaning up the batter and flour wasteland that used to be our kitchen.

‘See,’ I say, ‘Absolutely relentless. He just won’t take no for an answer.’

3 thoughts on “Adrian Sturrock: ‘I notice her knuckles whitening around her wine glass as she surveys the batter and flour wasteland that used to be our kitchen.’”