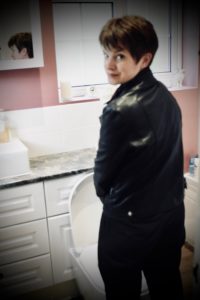 She did toy with the idea a while ago, but I didn’t think she’d actually go out and buy one. So, when my wife approached me in the bedroom while I was reading, I thought for a second or two that perhaps the parcel she was holding might be a gift for me. I like gifts.

‘How’s your day?’ she asks, as she leans over the bed and kisses me.

‘I had to go to work,’ I remind her. ‘What’cha got there?’ I look at the package she is clutching, noting that it is still sealed.

It’s my new accessory for our next road trip,’ she says.

‘I always need a present,’ I say, smiling.

‘Not one of these presents, you don’t.’

‘Trust me.’ She rips open the packaging and pulls out a bright purple nylon bag, which she holds up for me to see.

‘They actually exist? I mean, Shewees are actual things?’

‘I Know, right. Now, we’re equal.’ She loosens the drawstring on the bag and pulls out the device. ‘See?’ She models it for me via a series of faintly disturbing poses. ‘And it has an attachment.’ She pulls out a secondary piece of plastic piping and pushes it onto the first, thus doubling the length of the Shewee pipe.

‘Is this Shewee envy I’m witnessing?’

I can’t help thinking that this is a bit of an unnecessary purchase on her part.

‘That’s such a male thing to say,’ she accuses me. ‘Men can wee anywhere. This just levels the playing field a little.’

‘But where would you like to wee, that you can’t already?’ I think of the many times I’ve been caught in traffic, desperate for the toilet. A Shewee wouldn’t have saved me then. It occurs to me to hope that Nat isn’t thinking that she would use her new purchase inside the car.

I look at her suspiciously. ‘Good. Because we wouldn’t want to have to live with the results of any unfortunate leakages or spillages,’ I say, ‘especially not on a three-week road trip amongst the heat of Eastern Europe. And don’t forget that the seats are heated and so have electric wiring running through them; one unfortunate mistake would have you fused to the chair as the car’s headlights flicker and the radio begins to crackle off channel.  A great tabloid story, yes – and, come to think of it, it would probably make an equally memorable movie clip (In fact, I should probably write this down) – but not a great end, or start … or, in fact, middle, to our road trip.’

‘… You’re weird,’ she says, before adding, ‘Look. It comes with a free hand sanitiser.’ 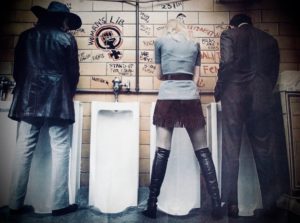 ‘Is it really such a big deal,’ I ask, ‘the difference between weeing standing up or crouching down?’

Nat looks at me in silence, as her face screams, ‘You really need to ask?’ at me.

This makes me feel the need to legitimise my question a little further. ‘I mean, on the very rare occasion when I might be forced to pop behind a tree during a journey, I’m not sure that it would overly matter to me what pose I struck whilst I was there.’

‘And how are your shoes, generally, at the point of après-wee, I mean?’

‘Try weeing crouched down next time, and then ask yourself the same question.’

I play this scene out in my mind but am still not sure what she’s getting at.

‘Look,’ she says, my Shewee will just make things more convenient, not to mention a little less conspicuous at the side of a road.’

‘Are you actually saying to me that the sight of a woman weeing into a bush on the side of a road, standing up like a man, is less note-worthy to the average passing driver and his/her family than if she were discreetly squatting behind her car, with the passenger door open as a visual barrier?’

‘So, riddle me this, Jester: if discretion did, in fact, play a part in your Shewee purchase, why did you choose to buy a bright purple one?’

‘Purple’s my favourite … Oh, I see what you mean. Well, I’ll be facing away from the traffic.’

My mind soon moves on to wondering about the physics involved in incorporating a Shewee into a game of which of us can wee the highest up the side of a tree, but I don’t share this with Nat; I feel I might be winning my current Shewee argument, and I don’t want to spoil things. I don’t win arguments often.

There have only been two occasions during our road trips together when a desperation to find a bathroom has turned into an emergency for Nat. The first was when we got lost and accidently found ourselves in a traffic jam in the centre of Geneva. (When I say lost, we shouldn’t have been anywhere near Geneva – or, in fact, Switzerland!) The second was the following year, when we had to make an emergency stop in Germany’s Black Forest.

During the first occasion, I managed to find a garage to pull into where a nice man with no English but a good grasp of mime eventually allowed Nat to use the staff loo. On the second occasion, we took turns to sneak behind a cluster of trees on a country road. My personal worry was that this was potentially bear country and that we may have inadvertently just stepped into a bears’ convenience. Nat, it seemed, had a different concern on her mind, as she returned to the car carrying her soggy flip flops in her hand. (On reflection, perhaps I better understand her Shewee purchase now.)

It’s early the next morning when Nat wakes me to ask whether I want to go into the shower before or after her. I open my eyes to see her standing next to the bed with her Shewee in one hand and the instructions in the other.

‘It says here that it’s best to practice with the Shewee in the shower before using it outside for the first time, in case of any …’

‘I think I’ll take the first shower this morning, if it’s ok with you’ I say.

2 thoughts on “Adrian Sturrock: ‘Gender equality shouldn’t come with conditions – though it seems it does sometimes come with attachments.’”