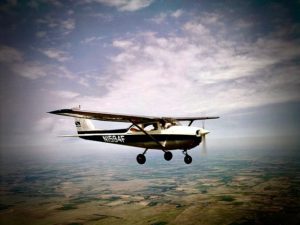 I’m sitting in a tiny cockpit with a guy called Ben who, despite looking like he’s just started secondary school, informs me that he will be my flight instructor for this session.

I look at him. ‘How long have you been flying?’ I ask, trying to sound as casual as I can.

‘Pretty much since I was twelve,’ he tells me.

‘And have you flown much over the two years since?’

‘He smiles. ‘I got my pilot’s licence when I was seventeen, and I’ve been teaching people to fly for the past eight years. I also do aerobatic display flying in my spare time.

I’ve never sat in a two-seater Cessna before, let alone flown one. There are a handful of dials in front of me, none of which suggest much. I also can’t help noticing a distinct lack of steering wheel, which means I don’t know what to do with my hands. When I push on either of the two footbrakes, all that happens is that the flippers on the wings wiggle at me. I wiggle back at them.

I look back across at the flippers. ‘Of course they are,’ I say, and smile at him.

‘They work in opposition to one another,’ he continues, ‘they allow one wing to generate more lift than the other, which, in turn allows the plane to ….’

‘Did I leave the oven on, this morning?’ I think to myself.

After a five-minute briefing, Ben hands me a laminated card with a list of pre-flight checks printed on it. ‘Read these out as we run through them,’ he says.

While I read each in turn, Ben flips the corresponding switch or points to the dial in question and comments on it.

Between us, we agree that the ‘Idle cut-off’ is checked, that the ‘gyros are uncaged’, that the ‘high rpm’ is checked, and that ‘cowl flaps – open right – open left’ are also checked. To be honest, Ben lost me after asking me if my seatbelt was tightly done up, though I’m totally back with him at the end of the checklist, where it mentions ‘cabin heat: check’ – it is, after all, December.

Finally, having ‘checked’ whatever the hell the ‘magnetos’ and ‘Trim’ are, Ben tells me to taxi the plane up to the end of the runway.

‘Are you sure?’ I ask, knowing how disastrous putting me in charge of his plane could be, even while it’s still on the ground.

‘In your own time,’ he says, pointing in the direction he’d like me to go.’

‘STOP!’ Ben grabs the lever and brake from me. ‘Always pay attention to the wingspan,’ he says, ‘so you don’t damage them … or that shed on our left, there.’

‘No, neither does mine,’ says Ben.

Having manoeuvred us away from any sheds, and past some trees that are blowing in the breeze ahead of us, he gives me back control and we slowly taxi to the designated point at the runway’s edge. At this juncture, I’m a little nervous. I’d expected Ben to say that he would be taking charge from this point on, at least until we’re in the air, but he hasn’t said this yet. Instead, he is telling me to point the nose of the plane at a selected spot at the other end of the runway and to give the aircraft full throttle.

Harnessing my inner nihilism, I do as I’m told, and the plane instantly picks up speed along the airstrip. ‘Fuck!’ I think, but I don’t say this out loud; I don’t want it to be the last recorded word that leaves my mouth before my death.

Once we’ve hit top speed, Ben says, ‘I have control,’ and lifts the nose off the ground. We are instantly in the air and climbing. ‘You have control,’ I say, for no other reason than to attempt to sound professional about things.

Once I’ve acclimatised to being in the air, and have had a quick look at what we can see below us, in order to help orientate me, it occurs that one of the things that wasn’t listed on the earlier checklist was ‘parachute’. I discreetly look around the tiny cabin but see nothing to indicate that we have one, let alone one each. I lean forward and, as inconspicuously as possible, feel around under my seat.

‘We don’t need any,’ says Ben, seeming to read my mind. ‘If for any unlikely reasons the engine fails, this plane becomes a glider, and we’ll just head for a nearby field for a gentle landing.’

I’m glad to see that he’s considered this, and that he has a contingency plan in place for it, as I sure as hell don’t. I also inwardly commend him on his use of the word ‘gentle’.

It’s quite pretty flying over the Hampshire countryside. It’s mostly rural, with occasional breaks in the cloud illuminating the various greens and yellows of farmland below.

‘On our left, just up ahead of us, is Downton Abbey,’ says Ben, pointing.

‘It is,’ says Ben, ‘It’s the Highclere Castle Estate.’

I look at the distinctive and familiar shape of the building’s façade, and am instantly reminded of how rich I’m not.

‘How much does it cost to get a pilot’s licence?’ I ask.

‘That depends,’ says Ben, ‘You’ll need to complete a minimum of forty-five hours flying time, plus there are nine exams to take. The whole thing usually costs around £10,000.’

‘I look again at the Castle Estate as we now fly directly over it. I think about the fact that my wife’s ancestors lived in a house like this. I’m also aware that I’m about four generations too late. 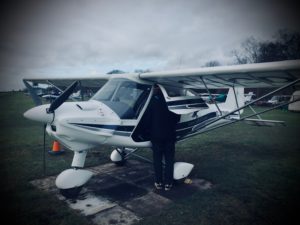 Over the next forty-five minutes, Ben talks me through how to execute smooth turns to the left and right. Very occasionally, I manage them. But the important thing is that every time my manoeuvres are not so smooth, I at least understand why. I’m beginning to really enjoy this.

‘Would you like to get above the clouds?’ he asks.

We discuss optimum speed and how to maintain it as we climb. This is easy. I’m beginning to wonder why I’d need forty-five hours of flying to get this right, but then I realise, as I look down, that only one person in this cockpit knows where we are and in which direction we’re flying. And that person isn’t me.

Above the clouds is shimmering gold and orange. It’s quite beautiful up here.

‘And this is why I do this job,’ says Ben, nodding at the stunningly ethereal environment around us. ‘And, also, because it’s so peaceful up here. What do you do for a living?’

‘I coerce teenagers into doing things they don’t want to do,’ I say.

‘Sorry?’ I sense a change of tone in Ben’s voice.

Ben laughs. ‘I suppose it pays for things like this, though,’ he says.

‘So does organised crime,’ I say. ‘I’m currently weighing up my options.’

After a few more attempts at controlled manoeuvres, Ben points into the distance. ‘See that building over there, at about eleven-o-clock?’

I follow his line of vision and point too. ‘That one?’

I look at the outline of the main house, and the other buildings and land that make up the estate. ‘His house is bigger than mine,’ I say.

‘Whenever we fly over his house, he files a complaint about noise nuisance,’ says Ben.

‘Really? Does he type it in ironic sans font?’

‘The last time he complained, my boss sent him a whole file on aviation law, pointing out that we are operating well within our legal parameters.

‘And what are the legal parameters?’

‘We must keep to a distance of at least five hundred feet above the highest structure at any given point.’

‘OK,’ I say. I imagine the plane having to take a sudden arc over Lloyd-Webber’s inflated opinion of himself. I’m also thinking that I wish I’d brought my sunglasses.

‘What would you like to do now, asks Ben.

Before making our way back to the airport, Ben asks if I’d like to experience some aerobatic manoeuvres. I say yes, and so he takes full control of the plane and abruptly lifts the nose into a fast ascent, followed by a dramatic drop from the sky, and finishing with a few 360-degree spirals. I’m aware that my excitement at this point is equalled only by my intense sense of nausea.

For someone who has difficulty travelling in the backs of cars, I quickly realise that ‘Yes’ was the wrong answer. I’m hoping I can regain some colour by the time we get to ground so that Ben doesn’t get to see how lifeless I now look. I bite my lips so as to encourage at least some colour back into them

After a moment or two of further erratic manoeuvres in which he tells me that what I’m currently experiencing is gravity x 2, he hands me back the controls in order for me to bring the aircraft back level, and at a more leisurely air speed. ‘OK, let’s head back towards the airfield,’ he says.

I look out of the windows on both sides. All I can see are fields and miniature clusters of both civil and Ministry of Defence buildings. ‘Where’s the airfield?’ I ask.

He guides me in via a pond in the distance that we use as a turning point, before having me take a straight line as I lower the plane’s nose. ‘That’s it, keep this line, and don’t be afraid to give it more throttle,’ he says.

Shit! I hope he’s not expecting me to land this thing. I’m likely to damage more than his wings.

Luckily, as we come in closer, he says, ‘I have control.’

‘You have control,’ I say, again, for no other reason than to attempt to sound professional about things.

We land safely and park up/dock – or whatever other word pilots use to describe how they leave their planes – before Ben walks me back to the main office. I’ve warmed to this guy. I’ve also warmed to flying. I look at the price list for hourly lessons attached to the wall above his desk. ‘Ouch!’ I think to myself. ‘Forty-five times this? Plus exams? Plus learning materials?’ On the other hand, this might be a thing worth getting poor over. 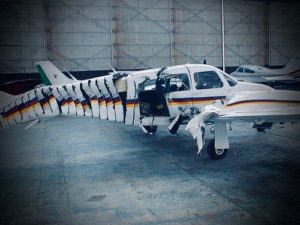 I find Nat sitting outside the airfield’s small café, where she’s been waiting for me with a book.

‘So I see. I keep buying you these experiences and you keep surviving them.’

‘I’m sorry,’ I say. ‘It might be cheaper in the long-run to just offer a one-off payment for a hitman.’

‘Yes, but where’s the fun in that?’ she says. ‘I’d thought I’d have done away with you when I bought you those racing circuit sessions.’

‘Perhaps your parents’ gift will do the job for you, when I climb London’s 02 in a few months’ time.’

‘Maybe,’ she says. ‘By the way, I forgot to ask, is your life insurance up to date?

‘You’ll have to just inherit everything, instead of everything plus insurance pay-out.’